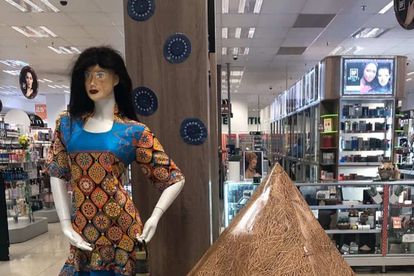 Dischem Pharmacy has received backlash after footage was shared on social media showing a ‘blackface’ mannequin installed in one of its Johannesburg stores.

A customer who visited the Dischem in Killarney was shocked to see a mannequin, draped in African couture and placed next to a rondavel structure.

Dischem has this installation up at their Killarney store. Apparently it's part of their "African beauty campaign". What's going on here? Why is this happening? pic.twitter.com/j3xsJ4qGEk

According to the customer, who took his frustrations out on social media, the controversial display was part of the pharmacy’s African beauty campaign.

However, people were not so convinced and many have called on Dischem to explain why a ‘blackface’ mannequin was used as an illustration.

With all the love black women have been showing Dischem. All that free marketing. They do this… https://t.co/MDcAyjojQU

Look, I don't know how you can sell products to people by insulting them like this@Dischem Im totally disgusted. You'll never see a cent from me ever again!! https://t.co/PY3kkmMBfE

Pharmacy removes mannequin, no statement released as yet

Aware of the perceived racial insensitivity of the campaign, the store has since removed the controversial mannequin and replaced it with the new display.

According to Jacaranda News, Dischem has confirmed that it is preparing a statement and will address the outrage soon.

“We are aware of this and are busy handling it. A response will be sent out in the next few minutes.”