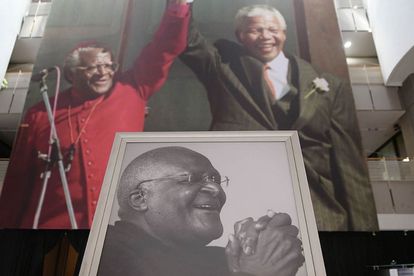 The City of Cape Town has released information pertaining to the interfaith tribute to the late Archbishop Desmond Tutu. In line with this, the City confirmed that members of the public will be able to view proceedings outside of City Hall on Thursday.

“A large screen will be placed outside the City Hall where members of the public are welcome to join and view the service as general public access will not be possible inside the City Hall due to limited seating as a result of ongoing national Covid-19 safety protocols. The public can access the Grand Parade from the side of the Castle of Good Hope.”

Due to the ongoing pandemic, the City encourages citizens to participate virtually.

“The City will livestream the service on our YouTube channel and share the link on our various social media pages.”

Furthermore, those wishing to leave messages of condolences or tribute were encouraged to do so.

“A condolence book has been set up outside the St. George’s Cathedral for members of the public to leave their messages. There is also an online condolence book available here. Condolence books will be available at all sub councils during the course of the week.”

Warning over road closures due to event

In a statement released ahead of the event, the City warned the public that numerous roads near the venue will be closed.

“The City of Cape Town advises the public that numerous roads around the City Hall will be closed tomorrow, ahead of tomorrow evening’s interfaith tribute to Archbishop Emeritus Desmond Tutu.Parade street from Caledon street to Darling street will be closed at 06:00.”

Additionally, a lane closure will be in place on Darling street, between Buitenkant and Corporation streets from midday onwards.

Late in the day, the City will be closing portions of Darling Street in addition to the other roads.

“At 15:00, Darling street will be closed between Buitenkant and Lower Plein streets. Corporation street (Longmarket to Darling street) will also be closed at this time.”

Due to the possibility of a large crowd gathering to view the tribute, the City further warned that additional closures remain likely.

“Additional road closures may take effect, depending on the size of the crowd that gathers on the parade – however, given Covid-19, the public is urged to follow the proceedings from the comfort of their home.”