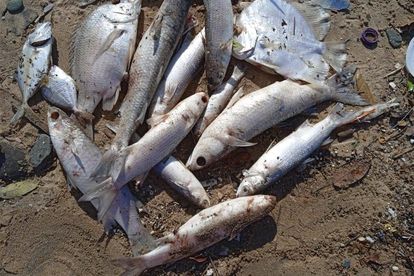 Some of the dead fish spotted in Umgeni River this week. Image via Facebook/Adopt-a-River.

Some of the dead fish spotted in Umgeni River this week. Image via Facebook/Adopt-a-River.

A shoal of dead fish has been spotted at Umgeni River in eThekwini as the metro municipality in KwaZulu-Natal continues to battle extremely high levels of E.coli.

Dead fish have been spotted at the river banks of Umgeni for a number of times in recent months. This has led the eThekwini Municipality to close some its beaches with immediate effect as the water quality does not meet acceptable standards.

The discovery was made by a team from Adopt-a-River, an environment conservation organisation during their visit on Wednesday, 21 September.

According to Adopt-a-River, water testing done by Talbot, using samples taken on September 15, showed extremely high levels of E.coli at various sites in Durban. According to Talbot, the ideal E.coli levels per 100/ml are 0-130 while the critical levels are over 400.

Samples taken from the uMgeni River in Riverside revealed that the water quality was at a critical level as the E.coli level per 100ml was at 2 613 000.

DA WEIGHS IN ON ONGOING CRISIS

Meanwhile, DA KZN Spokesperson on Social Development Mmabatho Tembe has slammed the ANC-run government in KZN for the situation in eThekwini saying the right to clean drinking water and sanitation is enshrined in the country’s Constitution.

Tembe said the current situation in eThekwini, is a case in point with residents left at the mercy of a government that does not care and which has literally left them drowning in sewage.

“This ongoing crisis is set to have an enormous impact on KZN’s already strained economy and job market. This while the inability to put food on the table will result in a spike in crime – something we are already witnessing.

“Then there are the many KZN school children, who walk miles and cross rivers to get to school as the government continues to fail them with proper transport. Daily exposure to dirty rivers will lead to severe and ongoing health complications.”

The spokesperson added that further crisis relate to the effect on cultural and religious practices which are enshrined in our constitution.

People use rivers and the oceans to practice baptisms, ritual cleansings and other purposes. Raw sewage will not only hinder this practice, it will endanger lives.

The Member of the Legislature said the reality is that KZN people cannot trust the water coming from their taps anymore while many cannot afford to fully purify their water so that it is safe to drink. What we are witnessing is the potential for massive illness and death.