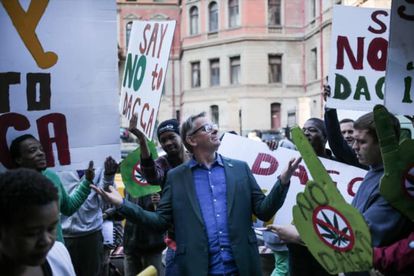 PRETORIA, SOUTH AFRICA – JULY 31: Jules Stobbs stands next to members of the Concerned Young People of SA outside the North Gauteng High Court on July 31, 2017 in Pretoria, South Africa. Stobbs and his partner Myrtle Clarke are mounting a legal challenge to cannabis smoking laws. (Photo by Gallo Images / The Times / Alaister Russell)

PRETORIA, SOUTH AFRICA – JULY 31: Jules Stobbs stands next to members of the Concerned Young People of SA outside the North Gauteng High Court on July 31, 2017 in Pretoria, South Africa. Stobbs and his partner Myrtle Clarke are mounting a legal challenge to cannabis smoking laws. (Photo by Gallo Images / The Times / Alaister Russell)

Spirits weren’t the only things that were high back in September, when the Constitutional Court ruled that using dagga (marijuana) in private was completely legal and above board.

The court – charied by Raymond Zondo – ruled that the government has 24 months to come up with a clear and coherent legal framework to regulate dagga usage. Three months down the line, and the grey areas have expanded.

That was perhaps summed up best at the Pretoria Marijuana Expo on Thursday. Thousands gathered to showcase dagga-infused products, such as oils, medicines and drinks, to try and exploit this new gap in the market.  Andrew Lawrie from Schindlers Attorneys told crowds that dagga smokers are – legally speaking – in the clear:

“Right now anyone arrested after the judgment has been granted a stay of prosecution. There will be a broad review of all these cases soon.”

But things just aren’t that black and white. Despite weed effectively being legalised in Mzansi, it seems that neither the police nor citizens are completely clear about where they stand. We’re still very much in a legal minefield, when you consider it all.

Where can you smoke weed in South Africa?

For example – dagga is fine for personal and home use: But what if you want to visit someone else’s home and blaze up there, only to be stopped by a SAPS officer in transit? Currently, the only definition the police can go off is “to use their own judgement” and then decide if a person has an excessive amount on them.

What is an excessive amount, we hear you say? According to the Drugs and Drug Trafficking Act 140 of 1992, anything under 115 grams can be successfully argued as being possessed for personal use. However, the government will be required to “neaten up” this law, explaining clearly what you should – and shouldn’t – be in possession of.

Furthermore, there’s been no indication on what constitutes a legal purchase of dagga. Selling the narcotic is still technically illegal, and growing your own remains the only law-friendly option. Is everyone in South Africa now meant to learn how to grow cannabis? There is confusion in the air, and it’s certainly stung a few of us.

Let’s play sensible first, though: If you’re these two and you’re in possession of 146 kilos of dagga, that’s too much. There’s an obvious intent to supply. The same applied to this Northern Cape couple who had R1.6m worth of dagga in their personal stash.

However, there have been some utterly bizarre arrests in the past three months or so. There is a big problem with the dagga because authorities are still acting retrospectively – arresting and processing people for offences committed before the judgement – when ConCourt have said this cannot happen.

Charmaine was confronted by five armed officers in KZN who believed she had an abundance of weed. They found less than 500 grams upon her person, but Charmaine was charged with possession and the other two were rapped for dealing. All three were released on R2 000 bail.

Berry is a Western Cape resident who makes cannabis oil for his business. He claims that 28 officers burst into his property and arrested him on suspicion of dealing. He claims the Hawks intercepted one delivery destined for a client with Parkinson’s, who died shortly after the incident. Berry’s wife was also arrested.

The Pretoria Rekord report that a 29-year-old man was arrested and 17 grams of dagga, with a street value of R600. His supply was confiscated and, i, he was hauled in as part of a joint operation.

In a recent viral video, Jacobsz was assaulted by two police officers who suspected her of smoking dagga. She didn’t feel she was committing an offence, but the two cops pushed and pulled her into the back of a police van.

What needs to happen with the dagga laws

All these cases stem from the fact that there are no clear guidelines about “private” spaces, and what constitutes a fair amount of dagga for home usage. You don’t want to spend six weeks growing a cannabis plant just so you can have a few joints. Regular smokers want to keep their supply well-stocked, without fear of having their homes raided.

The freedom promised to so many citizens has failed to materialise in a way that can put our minds at ease. It’s estimated R3.5 billion was spent on dagga criminalisation between 2014-15. Now is surely the time to implement unambiguous policy, and divert these crucial resources elsewhere.