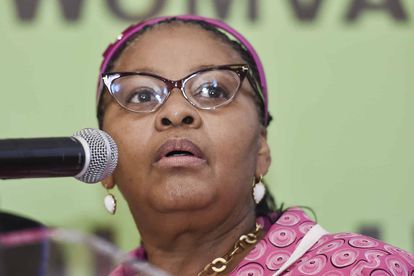 The Democratic Alliance (DA) is far from done with Defence and Military Veterans Minister Nosiviwe Mapisa-Nqakula over the controversial trip to Zimbabwe, and has called on her to provide the minutes of a meeting with her counterpart in the neighbouring country, Opah Muchinguri-Kashiri.

After receiving backlash for using a South African National Defence Force (SANDF) jet to travel to Zimbabwe with her fellow comrades in the African National Congress (ANC), Mapisa-Nqakula claimed she herself was heading to the country in her capacity as a member of cabinet, to meet Muchinguri-Kashiri.

The ANC was going to engage the ruling Zanu-PF party, amid a rising political and economic crisis. The minister said she was merely giving the delegation, led by party secretary-general Ace Magashule and NEC members Nomvula Mokonyane and Tony Yengeni, a lift.

The DA however is not buying it and wants the minister to provide proof of her trip and said it would even submitting a request via Parliament.

“The DA has serious reservations over the meeting and whether it even took place at all. We believe that the minutes of this meeting will reveal what we all suspect – that this meeting was nothing more than a ruse by the Minister to hide the fact that the whole trip to Zimbabwe was solely in service to ANC politics and had nothing to do with the business of government,” said the party’s Kobus Marais.

ANC decided ‘they are above the rules and regulations’

The ANC, which was accused by the DA and the Economic Freedom Fighters (EFF) of abusing state resources, buckled under pressure by apologising and paying back more than R100 000 of the money spent on the trip.

Following the backlash, President Cyril Ramaphosa moved to reprimand Mapisa-Nqakula for the scandal, docking her salary for three months. In another twist, Independent Media has reported that the president did in fact know about the trip but chose to throw her under the bus.

Marais said Mapisa-Nqakula’s own report into the scandal gave rise to their suspicion that she is conspiring to hide the ANC’s abuse of state resources.

“It seems clear as day that what actually happened was that the ANC wanted to visit Zimbabwe, but was unable to do so due to their current financial constraints and decided that they are above the rules and regulations governing normal South African citizens,” he also said.