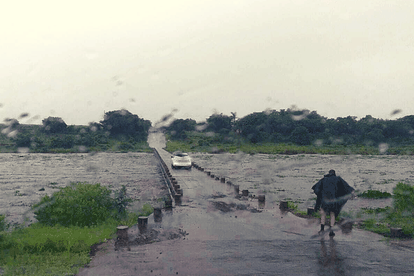 Tropical cyclone Eloise left nothing but death and devastation in its wake, and South Africa wasn’t spared. The cyclone made landfall in Mozambique on Saturday, but its outer bands reached all the way to South Africa.

More than 6 800 people were displaced in Mozambique and 4 246 evacuated over the weekend, while 12 had been injured as per Mozambique’s National Institute for Disaster Risk Management and Reduction (INGD).

In addition, Eloise destroyed more than 135 000 hectares of crops, as well as schools 26 schools, 11 hospitals and more than 1 000 homes. As per INGD’s statement, thousands of houses were partially destroyed or flooded.

Eloise then weakened into an overland depression since making landfall in Mozambique, and moved south towards South Africa on Sunday and Monday, but not before leaving three people dead in landlocked Eswatini (Swaziland).

Heavy rainfall caused by Cyclone Eloise has caused flooding in Limpopo and Mpumalanga, as well as in neighbouring Zimbabwe and Eswatini. It’s now heading towards Botswana.

Ezekiel Sibelius from the South African Weather Service (SAWS) said Eloise has “moved to western-Botswana and parts of North West but has lost momentum”. He added that the SAWS is monitoring the situation.

Minister Nkosazana Dlamini Zuma said during a briefing on Tuesday 26 January 2021 that two lives were lost in the floods in Mpumalanga – including a five-year-old who was swept away by floodwaters.

“We are in the process of accessing the damage and helping the families that need to be helped”.

This follows after the SAWS issued a red level 10 warning for parts of Limpopo and Mpumalanga on Saturday. According to Trans African Concessions (Trac) toll route managers, Eloise damaged the N4 motorway between Elandshoek and Ngodwana.

The flooding has also uprooted trees and damaged road infrastructure. The Democratic Alliance has since called on the MEC of Cooperative Governance and Traditional Affairs (CoGTA) to “urgently intervene to help those affected by Tropical Storm Eloise”.

Trudie Grovè-Morgan, DA spokesperson for on CoGTA, confirmed that “the roofs of a number of houses were blown off and walls collapsed in Block B in Nkomazi which is near Komatipoort, Mkhulu in Bushbuckridge, parts of Sabie, Graskop and Thembisile Hani”.

“Given the widespread destruction, we call on MEC Msibi to prioritise these areas and ensure that disaster management teams are on the ground and assisting community members”.

Disaster management teams in KZN were on standby as Jozini and surrounding settlements braced for flooding on Sunday. Dlamini Zuma said two people passed away in KwaZulu-Natal, including a 14-year-old boy.

In addition, more than 100 houses in the province have been damaged by the storm.

Low-lying areas of the province have seen mild flooding and debris, resulting in road closures. In addition, the Luvhuvu and Mufongodi rivers overflowed its bank and strong winds uprooted trees.

According to the MEC of Cooperative Governance and Traditional Affairs, Basikopo Makamu, one house collapsed and two people have been hospitalised in Limpopo.