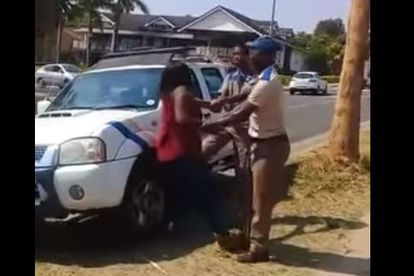 An internal investigation is underway following an alleged assault on a husband and wife couple at the hands of Mbombela traffic officers on Friday, which has since been reported on by Lowvelder.

According to Mahmoud Khedr, the trouble started when he was pulled over by two traffic officers while transporting his father to home affairs. Khedr, who is originally from Egypt, was then asked to produce his driver’s license; which he had forgotten in his other vehicle.

Upon realising his misfortune, Khedr offered to walk back to his home, which wasn’t far from the scene, in order to retrieve his license. This was when things turned nasty. According to Khedr he was prevented from retrieving his license by a strong-armed official.

Tensions flared up as the dispute intensified. Khedr then alleges that he was sworn at and kicked by the officers. The motorist attempted to explain that his father could operate the vehicle as he had an international license. Khedr said that at this point the officials became more irate and violent:

“They then started swearing at me and resorted to violence. They kicked me so hard that I need to use a crutch to walk.

They kept on telling me that they aren’t scared of me. I repeatedly told them to just give me a fine and let me go. I even offered that my father, who has an international licence, drive the car, but they also refused.

I would’ve paid a R5 000 fine to avoid this harrowing experience. I still can’t work or sleep, without thinking about it.”

In an attempt to quell the violent traffic stop, Khedr phoned his wife and requested that she bring his driver’s license to the scene. When his wife arrived at the scene she witnessed the ongoing assault and took exception to the officers’ bullying. Khedr explained:

“She asked them what was going on and they started pushing her too.”

Video footage from the scene shows Khedr’s wife being manhandled by the law enforcement officials. Zandile Qgawa, Nelspruit’s police spokesperson, confirmed that a case of common assault had been laid against the officers, but that no arrests had yet been made.