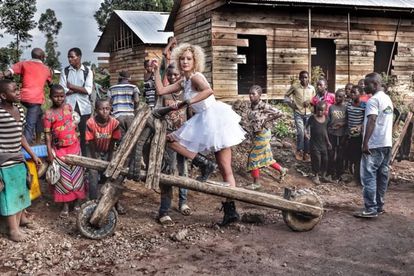 Not only are they making light of the very real conflict affecting the region, but Dorottya also posed with a blood diamond and bragged about the photo shoot using words like “tribespeople” and “the ghetto.”

As reported by Aaron Leaf from Okay Africa, the level of effort that went to their “Heart of Darkness” wedding was astounding. Actors dressed as militiamen, a drone, a security team, and not to mention that the ceremony took place on an active volcano while war is being waged below.

The images were initially shared on Milton’s Instagram account, and a photo of his bride on her knees in front a military man was captioned:

“Saying our vows at the top of an active Congolese volcano with a local tribe while a civil war is brewing below is surrealism at its best.”

This might be the single worst thing white people have done since the last terrible thing they did which was probably only an hour ago pic.twitter.com/SrurW1cyhw

However, the US-based photographer deleted his Instagram account, 11 000 followers and all, when the images gained traction for all the wrong reasons. But the Internet never forgets and traces of the tone-deaf and blatantly disrespectful incident can still be found online.

In an interview with fellow photographer Steve Huff, Milton explained that their entourage consisted of a “security team, local tribe, chef and a local pastor.” He goes on:

“After the Congo wedding, we needed an epic honeymoon therefore we decided upon a daring adventure in an Islamic region of Africa where sadly enough modern-day slavery still exists.”

Well, if the insensitivity of their wedding wasn’t enough to get people worked up, and with good reason, one can always exploit and objectify the communities torn apart by slavery, right?

A handful of netizens hoped that the photo series was satire, but sadly that isn’t the case. Twitter user Zoe Samudzi said she is “trying to figure out the worst part of this,” but feels that “the use of the wanderlust hashtag juxtaposed with this violence trivialising backdrop might be the worst part.”

Another user dryly remarked that the volcano should have erupted, while Xay added: “I’ve never wanted someone to get Ebola before.”

One of the best comments came from Roxane, who merely said: “Those pictures gave me a divorce.”