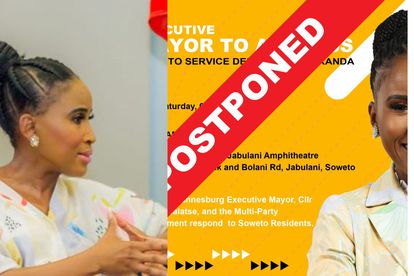 WHY COJ MAYOR HAS POSTPONED THE SOWETO MEETING

A CoJ media advisory detailed why Mayor Phalatse could not honour the public engagement meeting over service delivery.

The CoJ Mayoral Communication Director Mabine Seabe said on Saturday, 6 August, the Executive Mayor of Johannesburg, Councillor Mpho Phalatse, was set to provide the residents of Soweto with comprehensive feedback, following the delivery of 22 memoranda to the Metro Centre.

Two months back the residents of Soweto, led by Nhlanhla Lux, marched to the CoJ headquarters to hand deliver a memorandum to the mayor over issues of service delivery.

“Despite being ill and being placed on bed rest, the Executive Mayor was determined to go ahead with tomorrow’s proceedings, but was advised to fully recuperate before resuming her official duties,” said Seabi.

“Furthermore, it would not have been appropriate to delegate a Member of the Mayoral Committee (MMC) to represent the Executive Mayor on such a pressing matter, given that Cllr Phalatse committed personally responding to the memoranda,” Seabi added.

ALSO READ: Mpho Phalatse addresses fears she could be the next JHB mayor to die

He said Phalatse conveyed her deepest apologies to the residents of Soweto.

THE MAYOR SENDS THE MESSAGE HERSELF

Phalatse also weighed in by saying she has regrettably had to postpone tomorrow’s feedback session with the residents of Soweto.

“Despite wanting to proceed, I have been placed on bedrest and been advised to fully recuperate before resuming my official duties.

Wish to convey my deepest apologies to the residents of Soweto. A new date will be confirmed, in consultation with the Soweto Leadership”.

Seabi also stated that the Johannesburg multi-party government will never shy away from meeting and in communities.

“A new date will be confirmed, in consultation with the Soweto Leadership,” he reiterated.

“The Executive Mayor further wishes to thank the MMCs who have filled in for her over the last two days.”