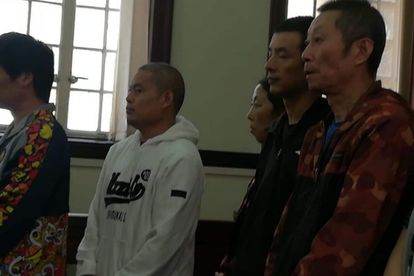 Seven Chinese nationals were arrested in November 2019 after a factory staffed with undocumented Malawian workers was discovered in Gauteng. Photo: Department of Employment and Labour

Seven Chinese nationals were arrested in November 2019 after a factory staffed with undocumented Malawian workers was discovered in Gauteng. Photo: Department of Employment and Labour

Seven Chinese nationals who were arrested on charges of human trafficking and contravening South Africa’s labour laws, are expected to return to the High Court in Johannesburg on Monday, April 26, 2021.

The matter continued the previous week, but had to be adjourned because Chichewe and Mandarin interpreters were not available at the time.

The four men and three women were nabbed in November 2019 as part of a sting operation conducted by the department’s Inspection and Enforcement Services (IES) branch in Gauteng, the South African Police Service (SAPS), the Department of Home Affairs and the Hawks.

The suspects are said to have trafficked illegal immigrants into South Africa and subjecting them to forced labour. Authorities pounced on them in a factory which staffed with 91 Malawian nationals – including 37 children.

The Department of Employment and Labour is involved in the matter and seeking prosecution against the group.

“The accused are facing schedule six offences and will face 160 counts relate to contravention of the Compensation for Occupational Injuries and Diseases Act (COIDA), Occupational Health and Safety (OHS) Act, Unemployment Insurance Act, Unemployment Contributions Act, Prevention and Combating of Trafficking in Persons Act, kidnapping, contravention of Immigration Act, knowingly employing illegal foreigners, human trafficking, kidnapping, pointing a firearm, debt bondage, benefitting from the services of a victim of trafficking, conduct that facilitates trafficking, illegally assisting person(s) to remain in South Africa and failure to comply with duties of an employer”

The Department of Employment and Labour

It would later emerge that the victims were transported into the country using containers. The Malawians are alleged to have been brought to South Africa by a middleman known as “the transporter” who is still on the loose.

Six out of the seven accused are currently out on bail ranging from R30 000 to R70 000, but have been ordered to adhere to strict conditions that restrict their movement and ability to conduct business.

Accused number 7 in the matter, Zhang Zhilian, is currently in custody after she was caught trying to flee the country on 24 February 2021. She was nabbed at the OR Tambo International Airport.