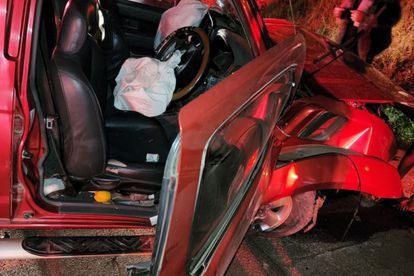 A collision on the N4 in Equestria, Pretoria left a child dead and eight other people injured.

The collision was between a light motor vehicle and bakkie around 20:00.

CHILD SUCCUMBS TO INJURIES IN ACCIDENT

According to ER24 spokesperson, Russel Meiring they responded to an accident and found a child had died and eight people were injured.

“ER24 arrived at 20:09 to find the light motor vehicle in the centre median while the bakkie was on the side of the road.

“Several patients were found lying around the two cars,”

He said on closer inspection, paramedics found that a child had already succumbed to his injuries. He was declared dead by the Provincial EMS.

Eight other patients were assessed and found to have sustained serious to critical injuries.

Meiring said paramedics treated the patients and provided them with several advanced life support interventions before being transported to nearby hospitals.

The collision took place on the R25  between Verena and Dennilton.

Four people from a VW Polo all died on the scene while the driver of the Mercedes Benz sedan who was in the car alone sustained serious injuries.

Mpumalanga Department of Community Safety, Security and Liaison said the victims are all males and they aged between 35 and 45 years of age.

The cause of the crash remains unknown at this stage. The investigation is already underway.

NINE PEOPLE WERE KILLED IN A BUS CRASH

In another accident on Sunday morning, nine people died when the bus they were travelling in crashed off a bridge near the N3 Die Hoek Toll Plaza in Heidelburg.

At least another 60 were left with injuries ranging from minor to critical injuries.

Paramedics arrived at the scene and found a bus on its roof on the side of the road. Several passengers were found seated near the bus.

“A number of the passengers had already climbed out of the crashed bus and were now seated near the vehicle. Several others still layed trapped inside,”

Paramedics set up a triage area and began to tend to the patients.