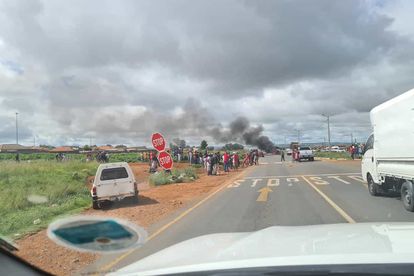 A man police believe was part of a group of suspected cash-in-transit heist robbers met his end in the most ghastly way – having his head blown off during the commission of the crime.

According to the South African Police Service (SAPS), the incident occurred in Mohlakeng, west of Johannesburg on Wednesday, 6 January 2021.

Police in Bekkersdal came across the heist, which was already in progress in the morning and quickly sprang into action.

When police arrived at the scene, they found that the G4S cash van had already been bombed.

“…and next to the cash van, a body of a man who for now preliminary investigations suggest that he was a suspect and that his head may have been blown off during one of the explosions was also discovered. A burnout 3 series BMW was also found at the scene and it has been established that it was stolen in Kagiso in December,”

They believe the man who died was going to check why the bomb had not detonated. The bomb then went off, killing him.

With the other suspects still at large, police have urged residents in Soweto to be on the lookout for a white single cab Ford Ranger and a silver BMW.

Both vehicles are believed to have been used as getaway cars in the commission of the crime.

Police are also investigating a failed cash-in-transit heist in Sebokeng, which occurred in December 2020. Two people were shot and wounded, including a bystander. At the time, the authorities had said security personnel was about to load cash into an ATM when they noticed a vehicle attempting to block their cash van.

A shootout then ensued but no money was taken during the ambush.

According to the South African Banking Risk Information Centre (SABRIC), there was a 29% increase in cash-in-transit heists between 2019 and 2020. Gauteng and Mpumalanga saw sharp rises of 173% and 46% respectively.