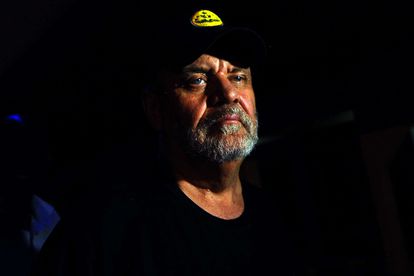 DURBAN, SOUTH AFRICA – APRIL 05: Carl Niehaus outside the Durban University of Technology during a night vigil in support of former president Jacob Zuma ahead of his court appearance on April 05, 2018 in Durban, South Africa – Photo: Gallo Images / Netwerk24 / Felix Dlangamandla

DURBAN, SOUTH AFRICA – APRIL 05: Carl Niehaus outside the Durban University of Technology during a night vigil in support of former president Jacob Zuma ahead of his court appearance on April 05, 2018 in Durban, South Africa – Photo: Gallo Images / Netwerk24 / Felix Dlangamandla

Spokesperson for the MK Veterans Carl Niehaus has revealed that he’s been the target of online trolls recently, with some people using extremely graphic language to post death threats against him.

The controversial ANC figure – best known for his unwavering support to Jacob Zuma – has sadly become a target for his political allegiances. Now, with the backing of the MKMVA, Niehaus is set to pursue legal charges against one of the Twitter users who suggested he will soon be “shot dead”:

This is the kind of threats, and worse, that I have to deal with every day. I am not going to take this any more, anyone who wants to continue to post these threats are must know that I will fight them with every legal avenue available to me. pic.twitter.com/Py0TcFrBTT

The Tweet – which translates to “You fucking traitor. I should have shot you dead in Angola! Your day is close!” – pushed Niehaus to breaking point. He vowed to pursue “every legal avenue” he could to ensure that the person behind the account was made to face up to their actions from behind the keyboard.

Jacob Neethling also has a habit of making these extreme posts – his Facebook wall shows several offensive comments, including the racial abuse of Zindzi Mandela and pro-KKK sentiments. It has also emerged that someone on IOL‘s Facebook page had promised to “cut the throat” of Carl Niehaus just a few weeks ago.

In a statement shared on Thursday, MKMVA condemned the “vile” threats and vowed to back one of their most prominent members all the way. They even took a swipe at fellow ANC members, blaming them for allowing the discussion of Niehaus’ politics to get so “poisonous”.

“During the past few weeks, Comrade Niehaus has been on the end of various abusive messages on social media. Many of these messages are racist and use threatening language. The safety of him and his family is under threat, and his children have also been threatened with an attack.”

“We are also disappointed with the way some ANC members have attacked Niehaus. We have no doubt they have contributed to the poisonous atmosphere. Carl has accepted our advice [on what to do next], and he will be opening a case at the Sandton Police Station.”

Carl Niehaus vs the (social) media

Niehaus has recently promised to take action against certain members of the South African press, too. The former spokesperson to Nelson Mandela has never been shy when it comes to opposing how the media have reported on the MK Veterans – even when it comes down to Niehaus’ own dress sense.

He slammed a News24 journalist for branding his military attire as a “Pep Store outfit”, accusing the unnamed reporter for disrespecting the armed struggle. It would seem Carl Niehaus’ latest wrangle is an altogether more serious issue, and as we reported last week, death threats can come with some pretty hefty sentences in Mzansi.

Media statement issued by the President of MKMVA, #KebbyMaphatsoe on behalf of the National Office Bearers of # MKMVA, concerning the threats made to MKMVA National Spokesperson, Carl Niehaus. pic.twitter.com/N4XSe91LsB