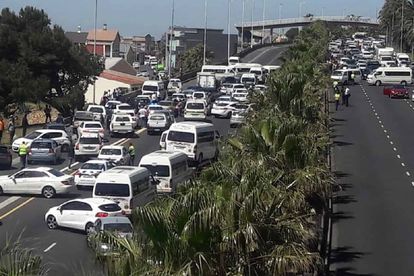 Traditional leaders have warned workers not to flock to rural areas during the nationwide lockdown.

Traditional leaders have warned workers not to flock to rural areas during the nationwide lockdown.

It will be incredibly difficult to manouvre through Cape Town traffic, on Friday afternoon. While peak traffic is often a proble in the city, motorists have been warned of a possible taxi protest that will affect certain parts of the CBD.

Taxi protest: Here’s what we know

The revolt, led by various taxi associations, is believed to stem from their dissatisfaction with how the city’s traffic department has targeted them.

The first wave of protests erupted in the western parts of Cape Town. Taxi drivers from Dunoon, Joe Slovo and Milnerton disrupted traffic along the N7, in the early parts of October, in reaction to a traffic operation that saw a number of the minibuses impounded for violating a number of traffic laws.

Then, on Tuesday, commuters were affected by demonstrations that were held at the Cape Town station deck.

According to mayoral committee member for safety and security, JP Smith, taxi drivers were protesting over the perceived abuse of power exhibited by traffic officers who target them on the roads, handing out ridiculous fines.

“According to reports, their dissatisfaction stems from the fact that they are fined in the first place as well as the fine amounts,” he said.

Things seemed to have cooled down over the next couple of days. However, on Friday, businesses in Cape Town have been circulating mass e-mail notices to their staff about possible disruptions to peak-hour traffic.

It is believed that taxi protestors have already interrupted traffic in some parts of the CBD, causing heavy backlogs of traffic.

At the time of publishing this article, these roads in Cape Town CBD had already experienced either heavy backlogs of traffic or closures: