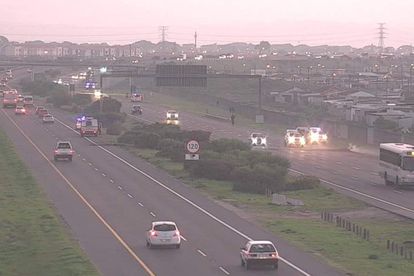 Serious disruptions to the N2 highway have been reported on Friday morning, as protesters from Mitchells Plain have taken to the streets to voice their anger. What started as a community demonstration has spilled over onto one of the busiest roads in the Mother City, causing some serious problems for Cape Town traffic.

Friday’s disruptions mark the second day of protests in the region. The first signs of discontent were spotted on Thursday. However, the evening commute was also interrupted, as burning tyres were wheeled onto the main carriageway.

Mitchells Plain protests: What has sparked the unrest?

The same roads in and out of Mitchells Plain – home to roughly 300 000 people and 30km outside of Cape Town – have also been targeted earlier this morning. It has not yet been established why the demonstrations are taking place, but issues with service delivery and housing have prompted similar actions in the area recently.

By 6:00, the R300 was shutdown between Jake Gerwel Drive and the N2. However, we’ve been reliably informed that the southbound carriageway has been open again. Access to the road still remains limited, as the N2 inbound and outbound routes to the R300 southbound ramp are still closed.

Several other disruptions on the highways have been reported, including:

Other regions affected by protests on Friday

The Cape Town traffic isn’t the only part of South Africa affected by disgruntled citizens on Friday morning. Reports coming in from North West confirm that taxis are blocking the integral R30 towards Klerksdorp. Drivers are being told to stay away from the Kanana region.

North West R30:   On the R30 #ProtestAction has been reported between Orkney and Klerksdorp, in the vicinity of the Kanana. The carriageway is obstructed by taxis and burning tyers. Avoid the area for your own safety.

There’s also a major commuter route in Johannesburg being held up by demonstrations: