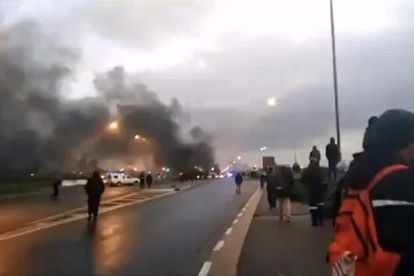 The Cape Town shutdown has commenced on Thursday morning with most roads leading into the N2 highway blockaded with burning tyres and rubble.

Why is Gatvol Capetonian protesting?

The protest, led by Gatvol Capetonian, is a call to the Western Cape government to prioritise the distribution of land to backyard dwellers.

According to Gatvol Capetonian’s national spokesperson, Fadiel Adams, it is high time the government rectified the errors of the past and allowed many of the displaced people of Cape Town to return to their rightful homelands.

“We want the integration that the struggle promised us,” Adams exclaimed in an interview with Africa News Agency.

“Our people are from Constantia and Diep River, and Goodwood and Woodstock, and District Six, and we want to go home. We know the state can’t house us all. There isn’t enough money. The economy is in a mess, thanks to Jacob Zuma.

“We know you can’t house us but give us our land and we will build our own houses,” he added.

While Gatvol Capetonian claims to be fighting for the interests of all people who are affected by the land issue, they have not shied away from stating their discontent towards people from Eastern Cape who “are refusing to wait their turn.”

“We’ve got great-grandmothers living in backyards with great-grandchildren but youngsters from the Eastern Cape, refusing to wait their turn, are getting title deeds, aged 25. We are still paying apartheid rent in Hanover Park, in Heideveld, in Bonteheuwel an in Lavender Hill,” Adams said.

Most of the areas that will be affected by protests, on Thursday, are linked to the N2 highway. Residents from the Northern parts of Cape Town may only experience the protests in the inner parts of the city. However, it seems unlikely that the shutdown will impact traffic on the N1.

These are the other areas which are likely to be affected:

This is some of the footage we have collected from social media on the Cape Town shutdown, as it happened.

The Cape Town shutdown is taking place and my daughter could not go to school. Someone sent me these videos.. pic.twitter.com/h1y7DpiOI8

Cape Town – Delft: #TotalShutdown RT @Nadine_Samuels @TrafficSA Delft entry is close no one can go out or come into Delft total shut down #protesting pic.twitter.com/lbOSM2NuBu