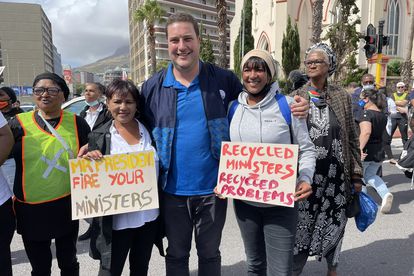 Hill-Lewis at the DA’s picket ahead of the motion of no confidence in the cabinet on 30 March 2022. Photo: Twitter / @geordinhl

Hill-Lewis at the DA’s picket ahead of the motion of no confidence in the cabinet on 30 March 2022. Photo: Twitter / @geordinhl

Cape Town mayor Geordin Hill-Lewis welcomed the imminent end of the National State of Disaster in a statement on Wednesday, 30 March. However, he sneered at the regulations proposed as part of the Health Act.

Hill-Lewis said the end of the state of disaster, which could cease as early as 5 April, was long overdue.

He said Cape Town is “open for business” and ready for the return of full-scale events, festivals and sports matches with packed crowds.

“Cape Town is also among the most vaccinated places in the country. There is no sound scientific reason to continue to restrict outdoor gathering sizes, and these restrictions only hold back the economic recovery that is so urgently necessary,” said Hill-Lewis.

The mayor said it was concerning that many of the state of disaster’s restrictions would persist under the proposed Health Act regulations.

As previously reported, some of the restrictions that will remain in place include mask-wearing indoors in public, social distancing in some indoor gatherings, funerals will be limited to 200 people, and outdoor gatherings are still limited to 2000 people.