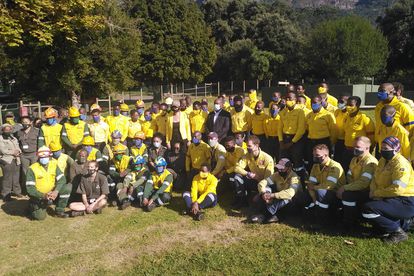 Minister Creecy on Saturday applauded the thousands of firefighters who bravely put their lines on the frontline this week.

Minister Creecy on Saturday applauded the thousands of firefighters who bravely put their lines on the frontline this week.

After conducting an assessment of the damage caused by the Cape Town fires to the Table Mountain National Park and surrounding areas, Minister Barbara Creecy of the Forestry, Fisheries and the Environment department thanked firefighters for their bravery.

Creecy applauded their discipline and training. Addressing a group of firefighters at the park, Minister Creecy thanked them for putting their lives on the line in battling the Cape Town fires last week. She added:

Minister of @environmentza Barbara Creecy thanked firefighters for their bravery shown in fighting the blaze in the #CapeTownFires that took place earlier this week. Minister Creecy also applauded their discipline and training. #WOF_WC@TableMountainNP pic.twitter.com/KRnuYJmSzc

‘We salute your ability to fight fear’

She said bravery is being able to focus despite when in the grips of fear. “We salute you; we salute your ability to fight your fears and we stand in awe and respect for that incredible ability”.

She also took a moment to appreciate the training and discipline which goes into being a firefighter, “because we know that without appropriate training it will not be possible to draw on strength and reserves”.

Creecy remarked that out of the hundreds of firefighters battling the blaze on the frontlines since Sunday 18 April 2021, only four were injured.

“Those who were injured, I am told, have recovered from their injuries and are back at their stations. That is a tribute to the training of these firefighters”.

The Minister of Forestry, Fisheries, and the Environment, Barbara Creecy visited Newlands Firebase and showed appreciation to the firefighters including TMNP rangers, and other stakeholders involved, and thanked them for their courageous effort during #CapeTownFires. pic.twitter.com/zNqeqWfady

Minister of @environmentza, Barbara Creecy at the Newlands Fire Base to receive a briefing on the recent #CapeTownFires from @TableMountainNP and to meet the firefighters who bravely fought this blaze. #WOF_WC pic.twitter.com/wsDYrTF4Q3

She explained that it is their traning and discipline which ensured their safety because “when the call comes to fall back, it’s almost tempting if you’re a brave person to do a little bit more.

The fact that there is discipline in the ranks of our firefighters allows them the opportunity “to take appropriate, self-protective action”, she said.

According to the Department of Forestry, Fisheries and the Environment, the “Hueys [helicopter] flew over 60 hours and dropped 411 tonnes of water to extinguish’ the Cape Town fires.

The SPCA is raising funds to assist animals that were injured in the Cape Town fire. It started a back-a-buddy campaign to purchase cool packs and various items to help any animals that were hurt during the blaze.

You can help by making a donation here.