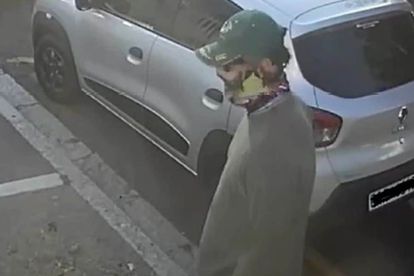 A Cape Town attorney was shot and wounded in his car in Gardens, Cape Town on Wednesday 12 February at around 7:50. Video footage reveals what took place.

According to CCTV footage, a vehicle pulled up next to Jakes van der Merwe in Constantia Road and two shots were fired — one landed in the door of the car and the other in his neck.

When TheSouthAfrican.com called Dicks Van der Merwe Attorneys, a colleague answered saying that Van der Merwe is the boss at the firm, but that he cannot supply any further comment.

“The circumstances surrounding an attempted murder are being investigated following an incident in Constantia Road, Higgovale, this morning,” he said.

Here’s what can be seen in the video

In the video, a man with a mask over his face, as well as sunglasses over his eyes, can be seen walking along the pavement.

Approximately 30 minutes later, Van der Merwe’s car can be seen making its way up Constantia Road. A few seconds later, one can see the masked man in a silver Hyundai H1 following him.

Footage taken from a different camera shows Van der Merwe pulling off on the left side of the road. The silver Hyundai pulls up next to him, two shots are fired and next thing, you can see Van der Merwe getting out of his car, holding his neck and searching for help.

According to TimesLive, Van der Merwe said he heard a huge bang and glass shattered all over him.

“It felt like someone had hit me with a bat on my neck. As I pulled my hand away from my neck, there was blood all over it,” he said.

In what could be deemed a miracle, he said the bullet was lodged just 1mm away from rupturing an artery that could have killed him.

“I want to know what this is all about so I can have an opportunity to apologise or speak to the person who wants me dead. I work in civil litigation, so my line of work is relatively harmless. I’ve been racking my brain as to who may be so angry with me that they would want to kill me but I can’t think of anyone,” said Van der Merwe.