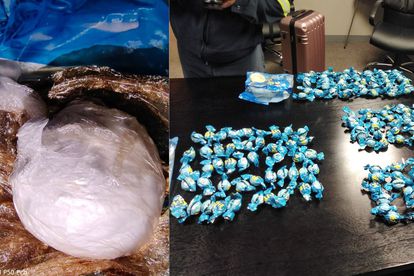 The cocaine was covered with chocolate wrappers. Image: SAPS.

The cocaine was covered with chocolate wrappers. Image: SAPS.

The Western Cape police’s Organised Crime Narcotics unit confiscated cocaine worth millions of rand on Tuesday, 4 October, after it received a tip-off about a passenger trafficking drugs through Cape Town International Airport.

“Amidst the hustle and bustle, they kept their sights focussed and conducted intense searches,” he said.

Eventually, the members found four kilograms of cocaine, covered in chocolate wrappings, hidden in the luggage of a 37-year-old man. The drugs have an estimated street value of R2.4 million.

The man was arrested and detained on a charge of dealing in drugs. Once charged, he is expected to appear before the Bellville Magistrate’s Court.

In an unrelated matter, the Hawks intercepted a cocaine shipment worth R400 million. Ebrahim Kara, 39, Meshack Mzungezi Ngobese, 47, and Elias Radebe, 42, were arrested and charged with drug dealing. The matter is currently before the Athlone Magistrate’s Court.