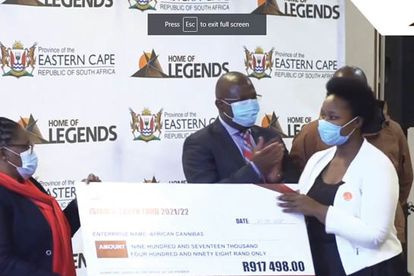 A young farmer from the Nelson Mandela Metro in the Eastern Cape has been given a boost by government to start her own cannabis farm.

Sinazo Tshaka (33) is one of the few youth in the country licensed as cannabis farmers.

She is venturing into the cultivation and agro-processing of the cannabis plant, thanks to funding of R917 498 from the Eastern Cape Department of Rural Development and Agrarian Reform’s (DRDAR) Isiqalo Fund.

“I am so grateful for this fund, as I took a leap of faith leaving my accounting profession to start something new,” says Tshaka.

“Cannabis farming includes hemp and marijuana. I focus on hemp, which does not contain tetrahydrocannabinol – the psychoactive compound in cannabis that makes a person high. In agro-processing, we extract cannabidiol,” she adds.

She became interested in cannabis farming in 2017, while undertaking research as a student at Nelson Mandela University, where she studied this line of farming. Once she secured funding, Tshaka got a farm in Elandsrivier, in Uitenhage.

“Farming is expensive, so this funding will help us a lot. We wanted to start working last year, but the Coronavirus Disease pandemic hit South Africa and we had to wait. This December, we will get our hands dirty,” she says.

Tshaka’s project will take in 10 graduates from agricultural schools, each year, to complete their internships in cannabis farming.

“I am going to train these young people to not look for employment, but to rather open their own enterprises so that we have more entrepreneurs,” she says.

Tshaka wants to show young people that there are many ways of making a living, other than formal employment.

“We now have a government that helps us with entrepreneurship, so as young people with ideas we need to go out and start businesses,” she says.

Tshaka encourages the youth not to fear going into career fields they didn’t study for if they are passionate and willing to work hard.

For information on the Eastern Cape DRDAR’s Isiqalo Fund, contact the department at 043 602 5006.