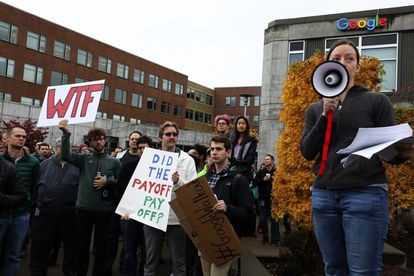 The recent walkout by thousands of Google employees at offices around the world was the first protest of its kind by well-paid and benefit-rich high-tech workers.

The collective action was triggered by a report that their employer had awarded several top male executives accused of sexual misconduct multimillion-dollar exit packages. But their list of demands suggests the roots of the crisis go much deeper.

To me, it’s a reminder of just how outmoded American labour laws are, a primary area of my research these days. In fact, the underlying grievances that motivated the Google employees to walk out are emblematic of what’s prompting millions of American workers to feel they have lost their voice.

And unfortunately, U.S. labour law no longer has their back. The walkout by these non-union professionals at Google, however, might change that.

The brief walkouts took place in about 40 Google offices including New York, London, Singapore and the company’s headquarters in Mountain View, California.

They followed a New York Times investigation that found that the search giant gave Andy Rubin, the creator of its Android mobile software, a US$90m exit package despite a credible claim of sexual misconduct. The report said two other executives received similar treatment.

The demands signal, in my view, a deep dissatisfaction with the lack of effective channels for reporting and resolving harassment claims, as well as a distrust of human resources, a department tasked with looking out for employees’ legal rights and enforcing company policies.

The Google walkout has little precedent to help us understand what might happen next.

For one thing, it’s the first time employees at a high-tech company – with their free meals and on-site gyms – staged a public protest. For another, it spanned multiple countries, a feat that very few unions are able to pull off. Finally and perhaps most importantly, the demands put forward go well beyond those covered under U.S. labour law.

The thing that comes closest to it is the spontaneous strike by 25,000 executives, managers and employees at the Market Basket grocery chain in Massachusetts in 2014 to protest the firing of their CEO in a family dispute over strategy. After a six-week strike and a consumer boycott, the board capitulated and sold the company to the CEO. At the time, I called it the most successful strike of the 21st century.

Both Market Basket and Google are examples of outbursts of employee tensions that have long been simmering among the private workforce. In a recent national survey we conducted at MIT, a majority of workers said they don’t have as much of a voice as they believe they should on a range of issues, from compensation and benefits to protections against harassment and respect for their labor.

Astoundingly, almost half of respondents said they would join a union if given the chance, a number that has increased from about one third in comparable surveys conducted in prior decades.

Yet, in case after case, companies have suppressed worker efforts to form a union, as we saw at Boeing facilities in South Carolina, Nissan’s Mississippi factory and Volkswagen’s Tennessee plant.

Like at Market Basket, Google’s employees have no legal standing to require their employer to negotiate with them, particularly over the issues they care about.

Legal standing only comes if they go through what is almost always a hotly contested, long and usually futile election process overseen by the National Labor Relations Board.

And should they try, these employees would quickly find the board would rule a good number of them ineligible for coverage for several reasons, such as their being managers, contract employees or simply outside the U.S.

Furthermore, their demands – such as an employee rep on the board or requiring the chief diversity officer to report to the CEO – are outside the narrow confines of what the labor relations board considers “the mandatory scope of bargaining.”

And the demand to eliminate forced arbitration would likely end up at the Supreme Court, which has already issued a ruling that backs companies’ right to do it.

All this is not to say that Google employees are powerless to achieve the “structural changes” they seek.

Although labour law won’t protect them, they might be able to use the hundreds of millions of Google’s customers – of its search engine, email program or mobile phone software – to pressure executives to negotiate in good faith.

In this regard, Google might be wise to look to Market Basket for guidance. Because of the strong customer support of the workers in that dispute, business plunged by 90 percent, which is likely what compelled the board to give in.

In other words, if Google’s employees hold steady despite the lack of federal protection, they could not only end up changing their company’s policy on harassment, but become the vanguard that could help disrupt U.S. labour law in the process.