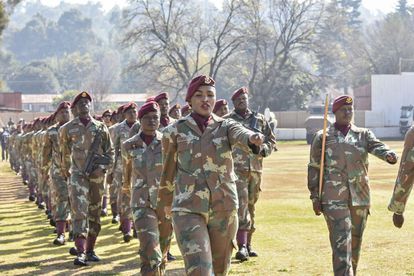 SANDF were ‘on the brink’ of being deployed to restore law and order in parts of SA last month – PHOTO: Twitter/@SANDF_ZA

SANDF were ‘on the brink’ of being deployed to restore law and order in parts of SA last month – PHOTO: Twitter/@SANDF_ZA

After weeks of recent speculation, President Ramaphosa ultimately decided against deploying SANDF to the streets of South Africa in August. A wave of protests and civil disobedience eventually quelled, and the army was told to stand down. But could we expect to see a u-turn soon?

Why is illegal mining so dangerous in South Africa?

Cyril Ramaphosa was addressing Parliament on Tuesday 30 August. His performance was, shall we say, divisive: He’s been accused of dodging a set of serious questions, as the Phala Phala farm scandal rages on. The DA, in particular, were left unsatisfied with the evasive answers.

However, after managing to ‘meandos’ his way out of difficulty, the ANC leader was grilled over a number of other pressing issues. SANDF, safety, and security was a big theme of the day, and in particular, the government’s plan to combat illegal mining came under scrutiny.

The so called ‘zama-zamas’ have wreaked havoc in some parts of Mzansi. Not only does their mining activity pose serious structural problems for the country, but some of those involved in the illegality don’t just keep their bad behaviour down the mine shafts.

Send in SANDF? Cyril Ramaphosa ‘gets tough’ on illegal miners

High crime rates amongst zama-zama communities have put law enforcement agencies on edge. SAPS say they are doing everything they can to prevent this illicit mining trade, but the task-teams formed so far are doing little to put minds at ease.

The SAPS has established task teams to tackle illegal mining, alongside other task teams dealing with construction site extortion, copper and cable theft, and theft and vandalism of economic infrastructure.

‘SANDF would be deployed if police asked for it’ – Cyril Ramaphosa

That’s why Cyril Ramaphosa is mulling the prospect of calling in some extra muscle. The head of state told the National Assembly that ‘further action’ is already being considered, at a national level, to dismantle the illegal mining network and target notorious crime hot-spots.

At the end of July, South Africa was sickened by the news that a group of zama-zamas carried out a horrific gang rape in Krugersdorp. Members of a film production crew were sexually assaulted, one-by-one, in an ordeal that lasted hours.

This lifted the lid on the ‘criminal culture’ tied to illegal mining, and helped to amplify the calls for SANDF support. Yesterday, Ramaphosa gave a clear indication that the army WOULD step in, if the top brass at SAPS deemed such action necessary: