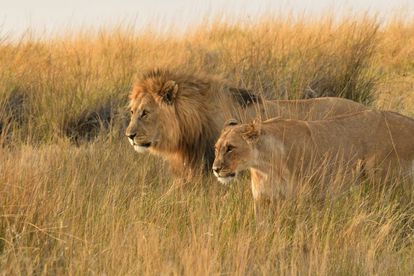 Two lions have been on the run ‘for the past few weeks’ -Photo: Visit South Africa

Two lions have been on the run ‘for the past few weeks’ -Photo: Visit South Africa

These are the words no concerned citizen wants to hear; ‘two lions are on the loose’. Residents in parts of KZN have been put on high alert, after it was reported that a pair of predators were on the prowl. Despite clues to their whereabouts, neither of these big cats have been recaptured.

KZN lions on the loose – where are they now?

Their break for freedom is a huge cause for concern. Rangers say they have a rough idea where the lions can be found, but gathering them safely will be an entirely different challenge. Sadly, they’ve already claimed a bovine victim on their jollies…

Ulundi Mayor Wilson Ntshangase is fully aware of the danger his constituents are facing. The elected representative has told locals ‘not go walking or running in the area’ until it is declared safe.

“These lions are the ones that escaped from the Hluhluwe-Imfolozi Park a few weeks ago. The local community and izinduna were informed. Residents are warned to refrain from running or walking in the area, especially in the early hours, until it is safe.” | Wilson Ntshangase

KZN lions remain on the prowl

For now, this corner of KZN must hold its breath. Expert teams are doing their utmost to get the situation under control, but the matter has been complicated by the fact there’s more than one lion to deal with. There’s never a Zulu King around when you need one, is there?

Rangers are searching for a lion which is suspected to be on the loose in the Babanango area near Ulundi in KwaZulu-Natal after a farmer found the half-eaten carcass of a cow with a lion's tracks around it. #SABCNews