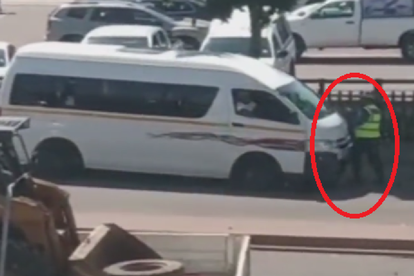 The taxi driver was filmed bumping into the traffic warden – Photo: Twitter

The taxi driver was filmed bumping into the traffic warden – Photo: Twitter

This is the ultimate road rage! A taxi driver in Durban has gone viral for all the wrong reasons this week, after a bizarre altercation with a traffic warden went viral. No-one was hurt in this incident, but the man behind the wheel has since been arrested and charged.

In the video shared online, we can see the committed officer standing in front of the taxi. The driver keeps nudging the warden with his vehicle, threatening to run him over on multiple occasions. Incredibly, the lawman stands his ground against the minibus.

After roughly half-a-minute, the officer makes way for the motor, after appearing to finish writing-up the taxi driver’s details. The suspect was eventually apprehended by law enforcement teams, and he has been charged with no less than FIVE offences.

Although being a traffic warden is a thankless and unsympathetic job at the best of times, no-one goes into work expecting to put up with this level of ignorance. Things could have ended much worse for all parties, and the reckless motorist will now face justice.

A video that has recently emerged showing a taxi driver trying to run over a Durban metro police officer.
The driver keeps driving forward slowly, pushing the officer, who appears to be writing a ticket.
Eventually the officer moves out of the way & waves for the driver to go on. pic.twitter.com/DFTLrW7wYJ

Durban Metro Police spokesperson Geraldine Stevens confirmed that the incident happened yesterday. She also explained how the traffic warden himself played a key part in helping police find the taxi driver who threatened to mow him down:

“We found that specific officer, who is a traffic warden and not a cop. Although it must be noted, he is training to become a police officer. He was the one who showed us the driver and was able to identify him.” | Geraldine Stevens