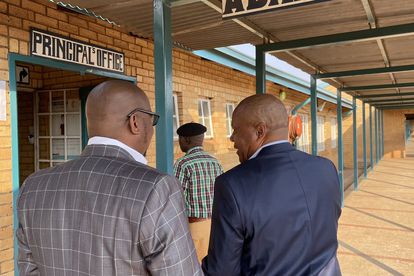 A delegation of politicians visited the school on Wednesday – Photo: Gauteng Government / Twitter

A delegation of politicians visited the school on Wednesday – Photo: Gauteng Government / Twitter

The death of 34-year-old Eugene Tshililo has left a community in Soweto reeling. On Tuesday, he was struck down in a hail of bullets right outside of the gates of his son’s school – and the murder has left a sour taste in many, many mouths.

The parent was shot dead while fetching his child at Faranani Primary School in Protea Glen, Soweto. It is reported that the parent had sought to intervene during a car hijacking of scholar transport. This took place in full view of learners and adults alike.

Gauteng’s new Education MEC Matome Chiloane has also expressed concern over the level of criminality that has rocked the local schooling community. He hopes that various interventions aimed at improving school safety will be finalised by the provincial government soon.

The Chairperson of the Select Committee on Education and Technology, Sports, Arts and Culture – Mr Elleck Nchabeleng – issues a scathing statement on Wednesday. The government official has called for ‘community mobilisation’, in order to fight criminal gangs.

Nchabeleng said it was becoming clear that communities must rally together, in order to stand against ‘the war’ that crime has become. In his view, law enforcement is now ‘clearly overwhelmed’, and has become ‘helpless’ in the face of violent crimes.

“We are reeling in shock with how this incident occurred and that a parent had to die in broad daylight having committed no crime. Criminals no longer hide their acts, and that calls for drastic action against illegal firearms and thuggery.”

“With the levels of lawlessness we are witnessing and the ease with which guns are attained and used against innocent civilians, soon the country will be run by criminal syndicates. Communities must now stand up to fight crime, however violent it may be.” | Elleck Nchabeleng