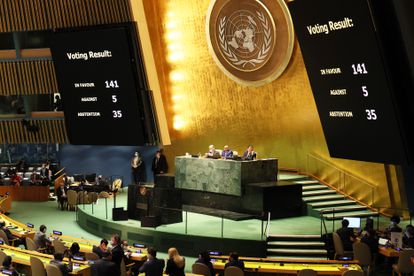 People clap as the results of a General Assembly vote on a resolution is shown on a screen during a special session of the General Assembly at the United Nations headquarters – Photo by Michael M. Santiago / GETTY IMAGES NORTH AMERICA

People clap as the results of a General Assembly vote on a resolution is shown on a screen during a special session of the General Assembly at the United Nations headquarters – Photo by Michael M. Santiago / GETTY IMAGES NORTH AMERICA

This charade is getting more excruciating by the day. South Africa has given itself yet another bloody nose on the world stage, after it presented an unpopular resolution to secure humanitarian aid for Ukraine. However, the paper has been scorched by critics, after it excused Russia of all blame.

The document didn’t even mention Russia in the text, leading to some UN officials claiming that this ‘undermines the action’ the Security Council is aiming to take. A failure to recognise Putin’s aggression won’t be tolerated by the international body – but SA diplomats argue their solution is apolitical.

South Africa at the UN

Another day, another controversy at the UN

US Ambassador Linda Thomas-Greenfield isn’t best pleased with the draft resolution, and she has accused South Africa ‘failing to demonstrate unity’ against the brutality of the conflict in Ukraine.

Russia is trying to undermine @UN action on the humanitarian crisis in Ukraine by backing competing SC & GA resolutions.

Russia’s PR admitted this morning that: “South Africa submitted an alternative text very close to our humanitarian draft resolution in the Security Council.”

South Africa is getting blood nosed at UN. Both in IPU and UNGA.

Ukraine is against the soft South Africa draft resolution that seeks to disassociate Russia as an invader of a sovereign state.

Russia’s own resolution was extremely similar to South Africa’s, and it also refused to acknowledge its role as an aggressor. Their draft was soundly rejected by the UN Security Council.

No other member state and no permanent representative apart from China supported the resolution, and talks remain at a standstill. Mzansi’s contribution to this episode has been nothing short of regrettable.

Since South Africa could not even persuade Lesotho to support its vote last time around in UN General Assembly – its chances of rallying support for its current attempt at UN are less than zero. Rather sad and pathetic how far we have fallen in the world