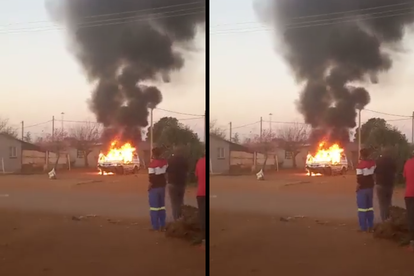 Klerksdorp was the scene of a mob justice act on Wednesday – Photo: Twitter

Klerksdorp was the scene of a mob justice act on Wednesday – Photo: Twitter

A vicious act of mob justice has been reported in Klerksdorp, North West this week – after police tried to arrest a suspected child rapist. SAPS officers were forced to flee from their vehicle, when angry locals set it on fire.

After a 10-year-old girl went missing in the Jouberton area, a search party was formed to find her. The minor was discovered hidden in a nearby shack. The suspect was then beaten heavily by those seeking their own form of retribution, and was hurried away from the scene by cops.

Unfortunately, the vigilantes on patrol weren’t satisfied with this resolution. Desperate to get a piece of the suspect, they turned their visceral anger towards the police. Stones were thrown at officers, before things truly got out of hand.

Some members of this Klerksdorp community decided to TORCH the police van that was summoned to collect the alleged child rapist. This resulted in minor injuries for one law enforcement official, and the suspect himself was left requiring hospital treatment.

The community attacked police and burned their vehicle in Klerksdorp yesterday as officers tried to intervene when community assaulted a rapist of a 10 years old girl.#crime pic.twitter.com/jsIxNGwefU

11/08/2022#CrimeMustFall
KLERKSDORP / KAGISO
Community attacked police and burned their vehicle in Klerksdorp yesterday as officers tried to intervene when community assaulted a rapist of a 10 years old girl.pic.twitter.com/bEgYqWlLP3 pic.twitter.com/PclKc2O3Sy

The situation in this part of Klerksdorp still remains tense. Meanwhile, the 10-year-old victim is now being assessed by a local rape crisis centre. A clearer picture of what actually took place here will be established soon. Police have also implored civilians to avoid getting caught up in vigilantism.

The girl was reported missing on Tuesday, and found on Wednesday. Her version of events will be crucial in bringing the suspect to justice. According to local sources, SAPS remain confident of securing a conviction against the man in their custody.