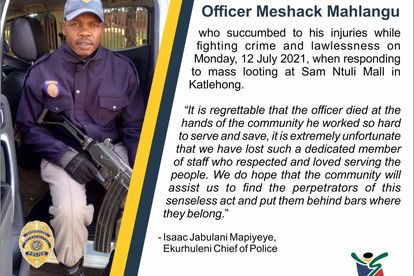 Police said a police officer had lost his life while seven other officers were injured while responding to violent protests, looting, and destruction in KwaZulu-Natal and Gauteng.

POLICE OFFICERS WERE ATTACKED ON DUTY

According to Colonel Brenda Muridili, the spokesperson of NatJOINTS, the injured officers are recovering from injuries sustained.

“The NatJOINTS has also sent condolences to the family of the deceased EMPD Officer Meshack Mahlangu and wished the injured SAPS members a speedy recovery.”

She said the attacks on law enforcement officers have been condemned.

“The SAPS, Defence and SSA as co-chairpersons of the NatJOINTS have condemned the attacks on law enforcement officers which have now resulted in the death of an officer from Ekurhuleni Metro Police Department, while seven SAPS members are recovering from injuries sustained while responding to violent protests.”

Three of the officers are from Kwazulu-Natal and four from Gauteng.

According to a statement by The City of Ekurhuleni, the slain officer, Meshack Mahlangu was based at the Zonkezizwe precinct.

“He would have been 12 years in the service as a metro police officer today.”

The incident occurred shortly after 21:30 on Monday during the mass looting of Sam Ntuli Mall in Katlehong.

“The police officers responded to information that protestors were flooding the mall, when criminals opened fire on them while monitoring the situation and trying to maintain law, order, peace, and stability in the area.

“The deceased officer succumbed to the injuries after an ambulance could not get access to the scene of the incident due to road closures in the area.”

His colleagues who witnessed the incident have been provided with the necessary professional support.

The Ekurhuleni Metropolitan Police Department (EMPD) Commissioner, Isaac Jabulani Mapiyeye has called for calm, appealed for peace and order especially during these trying times when the country is dealing with the silent assassin the Covid-19.

“It is regrettable that the officer died on the hands of the community he worked so hard to serve and save, it is extremely unfortunate that we have lost such a dedicated member of staff who respected and loved serving the people. We do hope that the community will assist us find the perpetrators of this senseless act and put them behind bars where they below.”