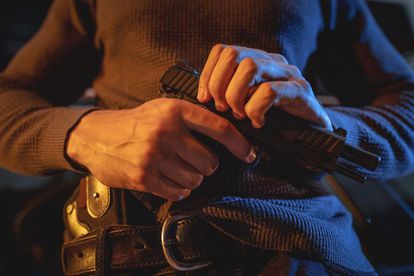 Armed robbers shot a policeman during a robbery of a SASSA pay-point on Wednesday. Photo: Envato Elements

Armed robbers shot a policeman during a robbery of a SASSA pay-point on Wednesday. Photo: Envato Elements

Police have launched a manhunt for a gang of armed robbers who shot a policeman during a robbery at the busy Allanridge post office, where people were queuing for their SASSA grants, on Wednesday morning.

SAPS spokesperson for Lejweleputswa District, Captain Stephen Thakeng, said the suspects had robbed the Free State post office while SASSA grant recipients were busy queuing outside to collect their money at around 09:30am.

“ The post office was robbed of cash by four armed robbers and a member of SAPS sustained a gun shot wound. Two vehicles were abandoned at Nyakallong,  Odendaalsrus CBD and used an unknown get away car,” he said.

“Four suspects armed with pistols and automatic rifles entered the post office premises and robbed (it of) an undisclosed amount of cash,” he said.

He said an SAPS warrant officer, who was shot during a shootout with the robbers, and other policemen had responded to the scene while the armed robbers were still inside the premises.

Mayhem breaks out in shootout at SASSA pay-point

He said the robbers fired several shots at the police vehicles and the police officers had then returned fire.

“A white Audi A4 sedan with Gauteng province number plates was struck during the shooting incident,” he said.

“The four armed robbers drove off and abandoned this sedan at a house in Nyakallong Allanridge and jumped inside a white Condour with Free State number plates and abandoned it in Odendaalsrus CBD,” he said.

“They further jumped into an unknown vehicle. They have undisclosed loot with them and a manhunt has been launched to trace these armed robbers,” he said.

Thakeng said a Warrant Officer had been shot in the leg when suspects open fire on him, riddling his vehicle with bullets.  He has been admitted to hospital for medical attention.

Thakeng said a case of armed robbery of the SASSA pay-point had been opened and assigned to Detective Sergeant Ntingi Mshumpela of Provincial Organised Crime who can be contacted at cellphone number 083 316 2689 with any information. The public can also provide information to the police by calling the police emergency number 08600 10111 or alternatively by using the MySAPS App.