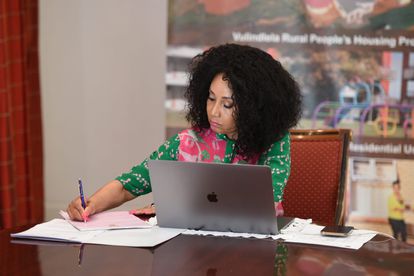 Lindiwe Sisulu’s vicious critique of the Constitution and rule of law in South Africa has drawn a line firmly in the sand. The previous presidential hopeful is now courting the pro-Zuma faction of the ANC, and one alleged riot instigator in particular has taken a shine to the tourism minister.

Duduzile Zuma-Sambudla, the daughter of former President Jacob Zuma, is no stranger to controversy. For the past six months, she has been an active cheerleader of violence and anarchy in Mzansi – using her ‘we see you’ Tweets.

It’s alleged that DZS has played her part in instigating riots and unrest across the country, via her large social media following. However, she has never been charged or investigated by police.

Lindiwe Sisulu has herself a new fan

Nonetheless, Duduzile remains a highly controversial figure – and it speaks volumes for Lindiwe Sisulu that she now has her backing. The ANC veteran’s public spat with Raymond Zondo has also endeared her to ‘RET forces’ – and Zuma-Sambudla has been fawning over the outspoken politician.

Earlier this week, Lindiwe Sisulu penned a scathing article, attacking South Africa’s Constitution and questioning who benefits from the laws of the land. The minister’s abrasive attitude took many by surprise.

Raymond Zondo, the Acting Chief Justice, said the judiciary was ‘insulted’ by her claims, and he stated that President Ramaphosa ‘must decide what happens’ in terms of disciplinary action for his comrade.

“Sisulu is a member of the Executive and Parliament. It would be a pity if it was allowed to stand just like that… her utterances are an insult to all African judges. What President Ramaphosa does next is up to him. We hope she has the decency to withdraw the attack on the judiciary.”