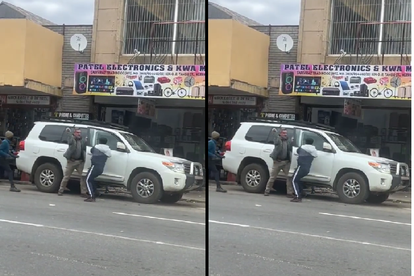 In the footage, a man can be seen fending off five attackers – Photo: Twitter

In the footage, a man can be seen fending off five attackers – Photo: Twitter

A middle-aged man who fought off FIVE attempted robbery suspects will not press charges against the group that targeted him – leaving police in Klerksdorp powerless to prosecute as it stands.

A viral video captured the moment an unassuming citizen was forced to fight for his life, after the quintet of crooks advanced towards his white SUV. The man withdrew a knife from his pocket, and lunged towards the criminals who were trying to intimidate him.

The footage shows the civilian – dubbed as Klerksdorp’s own ‘John Wick’ – also using a car door to repel his attackers. Eventually, the group cut their losses and retreated, and the would-be victim was able to escape the situation unharmed.

This apparently happened in Klerksdorp CBD in North West. Very brave man fighting back and defending himself and I assume his family in the car. pic.twitter.com/dbYli1tDQN

Locals are now refusing to cooperate with police

Alas, there will be no punitive justice for these thugs – and a worrying trend is now starting to emerge in Klerksdorp: Another incident similar to this took place in May 2022, and the victim was equally as reluctant to get law enforcement officials involved.

“Approximately five men were seen attempting to either rob the victim or hijack his white SUV vehicle in the Klerksdorp Central Business District (CBD). The man, armed with what appeared to be a knife, courageously fought back until the men gave up.”