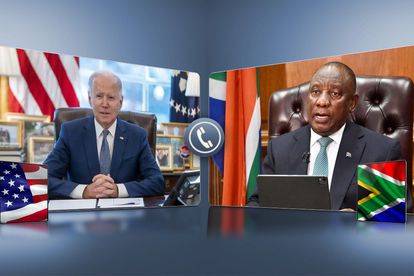 The image released by the Presidency after US President Joe Biden and President Cyril Ramaphosa held a call to discuss Ukraine.
Photo: Presidency SA

The image released by the Presidency after US President Joe Biden and President Cyril Ramaphosa held a call to discuss Ukraine.
Photo: Presidency SA

The Ukraine war is still not really showing signs of slowing down. Russian forces continue their invasion in the country. This week, several new reports of war crimes committed by Russia have also surfaced. Despite their busy schedules, US President Joe Biden and our own President Cyril Ramaphosa have found time for a call.

Ukraine war: Biden and Ramaphosa talk it out

Ramaphosa and Biden covered a wide range of topics during their call on Friday evening. From the Ukraine war, to trade and climate change, it seems it all got a mention.

But with the US standing firmly in Ukraine’s corner and SA standing firmly in the “not taking sides” realm, one would think things might have gotten a bit awkward. According to Ramaphosa, certain “views” were shared about the war.

“We discussed the need to support growth and development on the African continent. We shared views on the conflict in Ukraine and agreed on the need for a ceasefire and dialogue between Ukraine and Russia.”

But what is the official US take on what was discussed on the call?

According to a White House statement, Biden “emphasised the need for a clear, unified international response to Russian aggression in Ukraine.”

Biden and Ramaphosa also discussed what the violence in Ukraine means for “food security” in South Africa.

On Thursday, South Africa was one of 58 countries who abstained from voting in a United Nations resolution suspending Russia from the UN Human Rights Council.

There may be differences over the Russia Ukraine war. But there was one part of the call that clearly left Biden grinning from ear to ear. Biden revealed that Ramaphosa congratulated the US on appointing its first ever black woman Supreme Court judge.

On Friday, the US Senate voted to confirm Judge Ketanji Brown Jackson’s appointment to the country’s highest court.

While giving a speech outside the White House after her confirmation, Biden revealed that Ramaphosa had proudly told him to “keep it up”.