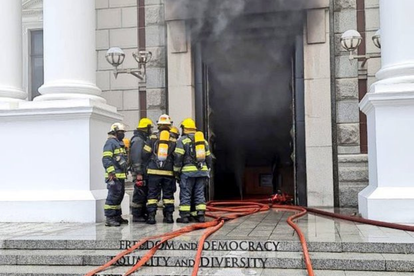 This isn’t a good look for Msholozi or his brood: Jacob Zuma’s daughter, Duduzile, has again set tongues wagging online, after she posted an inflammatory Tweet about Sunday’s Parliament Fire.

Duduzile Zuma-Sambudla has certainly made a name for herself on social media, and in recent months, has become one of the most vocal cheerleaders for her father, following his controversial incarceration last July.

That 15-month sentence for uBaba is thought to have incited some acts of violence in KZN, before full-on rioting gripped the province a few days later. Zuma’s daughter – and her ‘we see you’ Tweets – seemed to pay tribute to the trouble-causers.

‘We see you’ makes a comeback

And, once again this weekend, it seems DZS has resurrected her favourite line…

Both EFF MP Mbuyiseni Ndlozi and Public Protector Busisiwe Mkhwebane have also felt the heat, after both suggested the Parliament Fire was a ‘good opportunity’ to move the National Assembly to Tshwane. Eish…

The reaction online has been fierce, with many questioning why Duduzile would be in a celebratory mood following the Parliament Fire. One person was arrested while the blaze was still raging, as SAPS experts continue to comb the scene.

Brett Herron, the Secretary-General for the GOOD Party, has called upon the ANC to take disciplinary action against Jacob Zuma’s daughter, who labelled the message as ‘incendiary’.

“This kind of incendiary messaging cannot just be ignored. Most political parties and organizations would take disciplinary action against a member who celebrates the burning of our Parliament. We haven’t forgotten the July 2021 tweets.”

Give The Guy A Bell’s… pic.twitter.com/pwp3GD16HY