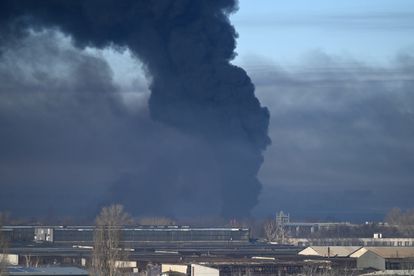 Black smoke rises from a military airport in Chuguyev near Kharkiv on February 24, 2022. – Russian President Vladimir Putin announced a military operation in Ukraine today with explosions heard soon after across the country and its foreign minister warning a “full-scale invasion” was underway. (Photo by ARIS MESSINIS / AFP)

Black smoke rises from a military airport in Chuguyev near Kharkiv on February 24, 2022. – Russian President Vladimir Putin announced a military operation in Ukraine today with explosions heard soon after across the country and its foreign minister warning a “full-scale invasion” was underway. (Photo by ARIS MESSINIS / AFP)

Ukraine border guards reported that Russian ground forces have entered the country from several directions. This comes hours after President Vladimir Putin announced the launch of a military operation in the neighbouring country.

According to an AFP wire, the border guards have reported the first death from the Russian invasion.

Tanks and other heavy equipment crossed the northern border. Troops also came from the south via the Crimean peninsula, which Russia annexed in the middle of the last decade.

According to reports, a serviceman was killed in a shelling attack along the Crimean border. It is the first officially confirmed military death and the death toll quickly rose to three.

Russia is reportedly trying to force its way through with rocket systems and helicopters, according to the service.

Ukraine has suffered many casualties in its eight-year battle with separatist forces in the east of the country but this is the first fatality reported in the south for years.

READ: Ukraine claims it shot down 5 planes while Russia says it ‘eliminated’ the country’s air defences

Earlier on Thursday, the Ukrainian military said it shot down five planes and a helicopter near Luhansk – one of the separatist strongholds. On the other side, the Russian ministry of defence said it destroyed Ukraine’s airbases and air defence systems.

The Kremlin claims the Kyiv government is overseeing a genocide in the east. Putin’s military invasion comes after weeks of amassing troops along the border between the countries.

On Monday, he recognised two rebel-held areas as independent states and received permission from Parliament to use military force outside of Russia’s borders.

Ukraine President Volodymyr Zelensky made a late appeal to the Russian people, to avert war, on Wednesday. He said he tried to call Putin to no avail.

“The people of Ukraine and the government of Ukraine want peace,” he said.