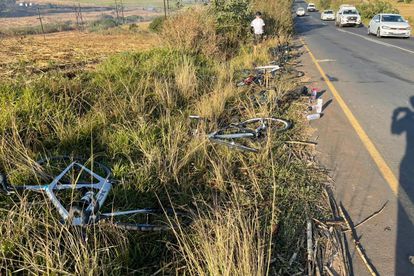 Eleven cyclists were run over in KZN, one killed when a car struck a group of cyclists on the R102, near Tongaat in KwaZulu-Natal on Saturday morning.

“IPSS Medical Rescue, together with IPSS Search and Rescue division, responded to the reports of a mass casualty incident on the R102 Frasers, Tongaat.

“It was reported that a vehicle had allegedly been overtaking several cars on a blind rise when the vehicle struck a group of cyclists.”

Herbst said a young cyclist in his mid 20’s, was unfortunately pinned under the vehicle and dragged for several meters, where he remained trapped under the car.

“IPSS advanced life support paramedics and rescue crews worked to free the boy. Unfortunately, he had sustained multiple injuries and was declared dead on the scene.

Traffic in the area remained affected on Saturday morning.

ALSO READ: Prank gone wrong as driver runs over a friend in KZN

Earlier this week a 35-year-old man was injured when he was run over in a prank gone wrong on Neptune Drive in Riet River on Tuesday.

According to Reaction Unit South Africa (RUSA) spokesperson Prem Balram, members arrived on the scene at approximately 09:26 on Tuesday.

They found the injured man lying on a grass verge on the side of the road.

“The driver of the bakkie informed Reaction Officers that the injured man was known to him. He explained that while traveling up Neptune Drive, he suddenly veered in front of the man as a prank but ended up running him over.”

He was treated for his injuries on the scene before being transported to the hospital by ambulance.