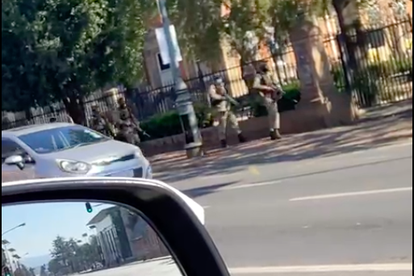 A video of SANDF troops in Pietermaritzburg was circulated on social media on Monday.

A video of SANDF troops in Pietermaritzburg was circulated on social media on Monday.

The SA National Defence Force (SANDF) has confirmed that it has deployed soldiers to support the police to quell the violent looting that has lashed KwaZulu-Natal over the past 24 hours.

SANDF spokesperson Brigadier General Mafi Mgobozi said in response to the South African’s questions regarding whether troops were being deployed to quell the violent looting, that a request had been received.

He further confirmed that SANDF troops have been deployed to the province.

“I can confirm that members of the SANDF have been deployed in support of the SAPS,” Mgobozi said.

Watch a video of SANDF troops that has been circulated on social media on Monday. The video was purportedly taken in Pietermaritzburg.

“The South African National Defence Force (SANDF) has commenced with pre-deployment processes and procedures in line with a request for assistance received from the National Joint Operational and Intelligence Structure (NATJOINTS) to assist law enforcement agencies deployed in Gauteng and KwaZulu Natal Provinces respectively to quell the unrest that has gripped both Provinces in the last few days. The deployment will commence as soon as all deployment processes are `in place,” the SANDF said in a statement.

“The duration and number of deploying soldiers will be determined based on the assessment of the situation on the ground by the relevant law enforcement agencies. Furthermore, it must be emphasised that the SANDF’s deployment objective is to provide safety and a safe working environment for members of the SAPS and other law enforcement agencies whilst they carry out their constitutionally mandated law and order duties. SANDF deployment-related information updates will follow in due course,” the SANDF said

The SANDF’s confirmation of the deployment followed unabated incidents of looting and burning of businesses. Spar supermarkets and bottle stores across Durban appeared to be a most frequent target of the violent looters who could be seen laughing as they ran with their arms full of stolen goods.

Durban residents awoke to a stream of reports of violent looting across the city that had continued throughout the night into the early hours of the morning. Looters continued their rampage after sunrise, looting a Spar in Berea Road and descending on Glenwood Village Spar and Davenport Centre. Several bottle stores including Fourways Spar Tops in Pinetown were also raided. Security companies were out assisting police to keep looters at bay in Waterfall and videos of residents fighting back against the looters also went viral.

The South African had asked Mgobozi to confirm whether a WhatsApp message that has been circulating on Monday was in fact true or not and whether troops were being deployed.

The message was purportedly from a Spar retail manager advising their stores.

Government have officially deployed the SANDF to KZN to attempt to get matters under control.  We as the SPAR Group are continuing to engage with Government.  Take care, hang in & be safe!”

Mgobozi responding saying only: “I can confirm that a request has been received.”

Social media groups and residents reported that helicopters could be heard circulating in the Pinetown and Waterfall area on Monday morning.