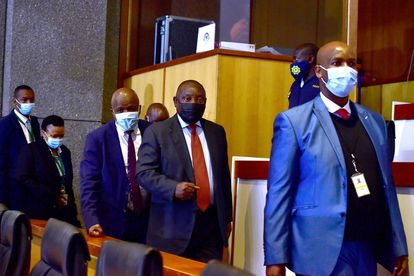 After a bruising day at the State Capture Inquiry on Wednesday, Cyril Ramaphosa finds himself back in the hot-seat on Thursday to field questions about the Guptas and state corruption – already, things have gotten off to a spicy start.

According to the ANC leader – who previously served as Deputy President during the height of state capture – protections were put in place to allow the Guptas access and approval to relevant structures.

This, in turn, allowed the Indian billionaires to profit from contracts hammered out with Eskom, Transnet, and even provincial government departments. Ramaphosa admits that the reaction to their movements ‘was not good enough’.

“The Guptas had protection, approval, and access to the relevant structures. Yes, the red flag having been raised, was not heeded, we should say that. The level of alertness should have been there and they had settled themsleves so neatly.”

Ramaphosa also found himself quizzed on matters relating to Malusi Gigaba on Thursday. The alleged ‘stooge’ for the Guptas was mysteriously shifted to the Public Enterprises portfolio from Home Affairs – overseeing the progress of state institutions that were now essentially managed by the architects of state capture and their lackeys.

Explaining why he was never the one who raised a red flag, Ramaphosa reasons that ministers can chop and change departments, based on their ability to ‘learn fast’. Eish, that’s not exactly what we’d call a convincing answer:

“A minister is appointed on her/his position by their ability to learn fast. Malusi Gigaba going from Home Affairs to Public Enterprises, I wouldn’t say was unusual, It really depends on the president and the assessments he makes of people who serve with him.” | Cyril Ramaphosa at the State Capture Inquiry