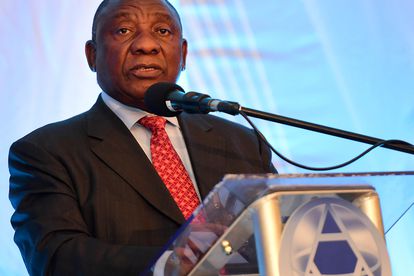 The department had planned to erect a 120-metre flag at the Freedom Park Heritage site in Pretoria as a symbol of unity and democracy. The project would have cost taxpayers a whopping R22 million -R17 million for the installation of the flag and another R5 million for geotechnical studies.

Widespread criticism of the project prompted Mthethwa to put it on hold and review the decision to continue with it. He had previously defended it, saying it is an important part of his department’s mandate.

“In upholding these ethos and the inalienable rights of citizens to be heard, the Minister of Sport, Arts and Culture has directed his department to review the process related to the Monumental Flag in its totality,” Mthethwa’s office said.

Ramaphosa was rather giggly with those in attendance when he relays the story.

“Mthethwa comes to me and says, ‘President, please tell me when I can call you’. I say, ‘Mthethwa I am in a cabinet committee meeting, we will talk afterwards’. I call him back and he says to me, ‘President this flag thing, which is such a wonderful initiative, it seems our people are not happy with it’, and I say, ‘Of course they are not happy with it. Cancel this thing,’” he said to the crowd, which reacted with laughter.