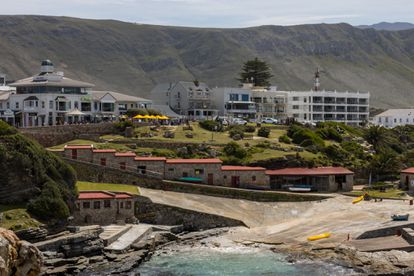 Hermanus town square, as seen from out at sea – Photo: John M / Flickr

Hermanus town square, as seen from out at sea – Photo: John M / Flickr

It’s been a rather exciting time for the coastal suburb of Hermanus in the Western Cape. Located a little over 90 minutes to the east of Cape Town, this tourist favourite was recently named as ‘the safest town in South Africa‘ – a factor which has seemingly drawn a gaggle of millionaires to move here over the last 12 months.

Hermanus is enjoying its moment in the spotlight, and one gets the feeling that it’ll be basking in this warm glow for a long time to come. The Cape Whale Coast has become a very attractive destination for the wealthy and well-connected, and money continues to flow into this part of the province.

A lot of that is down to the fact that well-off South Africans know they’ll have a secure investment in Hermanus. Judging by the latest Crime Index stats from Numbeo, that ‘safest town’ title is wholly appropriate.

The user-generated figures, which have been updated at several points throughout 2022, features a checklist of 13 important elements on the index. For Hermanus, eleven of these rank as ‘moderate, low, or very low’ – and its crime rating of 31.37 is the lowest of all 71 towns and cities featured on the database:

Although Hermanus may soon become a millionaire’s playground, life here appears to be much more affordable here than it is up the road in Cape Town. Although some other major cities are on a more level footing with South Africa’s safest town, the popular location has a significant cost-busting advantage over the Mother City.