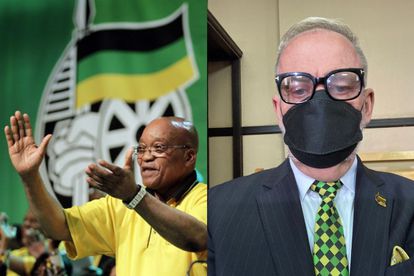 President Jacob Zuma was in the PMB High Court on Monday where long-time supporter Carl Niehaus made yet another appearance at the trial that has been ongoing for the last 22 years. Photo: Twitter

President Jacob Zuma was in the PMB High Court on Monday where long-time supporter Carl Niehaus made yet another appearance at the trial that has been ongoing for the last 22 years. Photo: Twitter

The beleaguered former President Jacob Zuma is once again in the Pietermaritzburg High Court on Monday. While many things stay the same, like the hovering flock of reporters trying to get the scoop on the trial and Carl Niehaus adorned in his yellow, black, and green for Zuma.

NIEHAUS WILL NEVER LEAVE ZUMA OUT IN THE COLD

As the weather in KwaZulu-Natal continues to rain on the parades of most, Niehaus was in chipper spirits outside the PMB High Court waiting in anticipation for the start of court proceedings.

Niehaus has always thrown himself on the sword for Zuma and shown his commitment to the former president by rallying supporters to wait with bated breath outside for the new development in the case.

“This morning I realised I have been coming to these cases for 22 years now. It is unacceptable that President Zuma has been undermined and the subject of political manipulation. His rights are being infringed and prosecutor Billy Downer along with the National Prosecuting Authority (NPA) are at the centre,”

On Sunday, the Jacob Gedleyihlekisa Zuma foundation decided that private prosecution is the sole path to remove Downer as the prosecutor in the Zuma trial.

‘DOWNER MUST BE ARRESTED!’

Niehaus, the controversial African National Congress (ANC) member, says he hopes the police and NPA take the charges laid by Zuma against Downer was treated with the utmost urgency.

“Downer has acted illegally and criminally. He should be arrested and as such an application will be made today for the court case to be postponed until proper action is taken against Downer,”

ZUMA IN GOOD SPIRITS BUT NO HOPE FOR JUSTICE

The former president was said to be in a good frame of mind but the trial is taking its toll on him. Niehaus said Zuma would be in a better place in his life if the matter was no longer an issue.

“The charges are trumped up. It is very difficult to see how President Zuma will ever get a fair and free court case. Over the last 22 years, there has been a myriad of speculations, conspiracies, underhanded dealings, and negative publicity. It is literally impossible for any judge to have a fair and free trial for Zuma,” says Niehaus.

He went further to explain that the trial should be thrown out because what is happening is not the pursuit of justice but more the pursuit of political attacks.