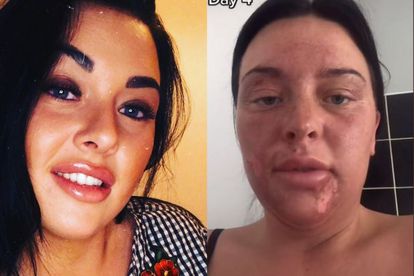 A 25-year-old mother was left with severe burn wounds when a viral hack on TikTok of poaching an egg in the microwave went wrong.

Chantelle Con, from the UK, has been posting videos on her TikTok account to warn others not to try the TikTok hack.

She explained that she wanted to make poached eggs in the microwave as it was quicker and easier to do.

She cracked a raw egg into a cup of boiling water to make poached eggs and placed it in the microwave for about 10 seconds.

The young mother was later taken to a hospital for treatment.

She described it as the worst pain she had ever experienced.

“I’ve ever experienced in my life, and I’ve had two natural childbirths.

It felt like someone had a blowtorch on my face constantly, and I was convinced my whole face had burnt off.”

In one of her videos, when responding to comments, she said she has been doing the TikTok hack for about two years without any incidents.

“I don’t know what I did wrong, maybe left it in too long.”

She has since the freak accident been very vocal on TikTok to warn others not to try the TikTok egg poaching hack.

This is not the first time someone was injured when cooking eggs in the microwave has gone wrong.

In 2019, the NewYork Post reported on 22-year-old Bethany Rosser, who was determined that it was safe to boil eggs in the microwave.

She told the publication that she was making breakfast before work.

“I googled to see if you could make boiled eggs in the microwave. On a page, it said that you could microwave the eggs as long as you add salt to the eggs in the water, to prevent them from bursting.”

Rosser added salt and left two shelled eggs to boil, taking them out after six minutes. She shut the microwave door and peered into the pot to see how they’d fared when they exploded in her face.

“They just burst all of a sudden,” she said. “As I splashed myself, I could feel my skin peeling off.”

She was rushed to a hospital.