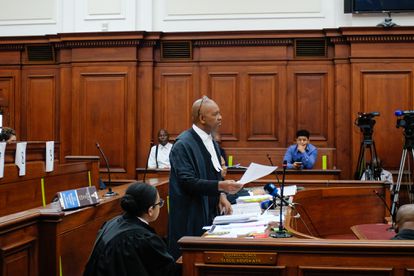 Alleged parliament arsonist Zandile Mafe’s defence gets another shot at securing bail for their client as the appeal will be reheard in the Western Cape High Court following a split decision.

ZANDILE MAFE APPEAL TO BE REHEARD

National Prosecuting Authority (NPA) spokesperson Eric Ntabazalila said the State and the defence were informed that arguments would be reheard at 9:00 on Monday, 30 May.

Judges James Lekhuleni and Daniel Thulare presided over the appeal on 25 April and reserved judgement. A third judge has been appointed to the bench for the next appearance.

He was initially denied bail, in the Cape Town Regional Court, on 4 February by Magistrate Michelle Adams, who refused bail because the court was not satisfied that exceptional circumstances exist that in the interest of justice permit his release.

“The Appellant has not advanced any arguments or raised any material misdirection on the facts and law which may lead this court of appeal to a finding that the decision of the ‘bail court’ was ‘wrong’ in terms of Section 65 (4) of Act 51 of 1977. 6.3 The Appeal should accordingly be dismissed,” said Menigo.

The defence, led by Senior Counsel Dali Mpofu, argued that the refusal of bail was incorrect because it was based on a ‘so-called confession’ that was not worth the paper it was written on.

In court, it was revealed that Mafe’s alleged confession was made after he was preliminarily diagnosed with paranoid schizophrenia.

Mafe’s next court appearance is expected on 9 June. The State asked for a postponement during the last appearance, promising that outstanding reports, including the final parliament damage report and crime scene and arson report, would be ready along with a draft indictment the next time Mafe appeared.

The matter is also likely to be transferred to the Western Cape High Court at the next appearance.

READ: Zandile Mafe matter could be transferred to High Court at next appearance