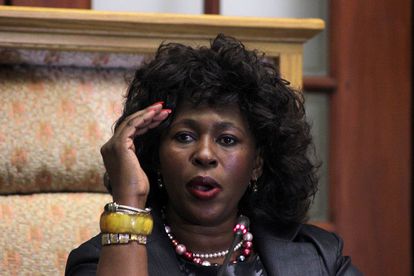 Former ActionSA councillor Dr Makhosi Khoza is speaking out in the wake of the party’s decision to terminate her membership – and she is not holding back anything. Khoza claims her now former political home doesn’t function independently and essentially follows instructions from the Democratic Alliance (DA).

Khoza, who was the party’s eThekwini Municipality councillor, has been at loggerheads with its leadership since the ANC elected her as Municipal Public Accounts Committee chairperson in the metro in late 2021.

ActionSA initiated a disciplinary inquiry into Khoza’s conduct and levelled several charges against her including bringing the party into disrepute – and acting in a manner which causes disunity within in the party. This was after Khoza went public about her disagreement with ActionSA’s leadership and did a range of media interviews where she openly criticised the party.

Dr Makhosi Khoza: ‘I THINK ACTIONSA IS A PROXY’

Speaking to Newzroom Afrika, Dr Makhosi Khoza now reckons ActionSA could be functioning as a “proxy” for the DA. Motivating her theory, Khoza claimed DA KwaZulu-Natal (KZN) leader Nicole Graham and other prominent party members were pressuring ActionSA to get rid of her, which eventually happened.

“The reality of where we are sitting now is that ActionSA is being directed by the DA of what to do and how to do it and that is why I am in this problem right now… Really to me, I think ActionSA is a proxy. Maybe it’s a black version of the DA, given the fact that all the black faces from the DA are gone. So ActionSA is really that place for me”

The party has also accused Khoza of seeking to topple its leader Herman Mashaba, but she has denied this and in turn claims they are just seeking to tarnish her name. ActionSA claims Khoza and a party leader in Soweto were plotting to oust Mashaba.

“This conversation took place in close proximity to a protest by these former members outside the City of Johannesburg council chamber, in which they can be heard chanting Khoza’s name,” said the party’s Michael Beaumont.

But she says she hadn’t even been sworn in as a councillor when this supposed conversation took place.