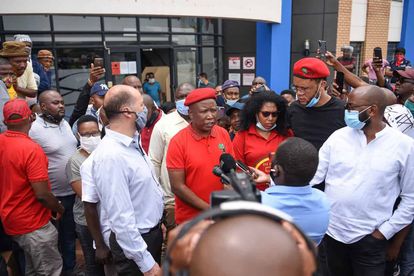 The violence which was reported outside of Brackenfell High School on Monday has become the biggest story in South Africa this week: Allegations of racism against the institution sparked protests from EFF members, who ended up being kicked and punched by an angry group of parents outside of the facility. Julius Malema has since responded…

The firebrand EFF leader has weighed-in just as the situation remains on a knife-edge. Both the WCED and SAHRC have condemned the scenes witnessed yesterday – and for those who need a recap, it’s been a manic 24 hours in Brackenfell:

What Julius Malema Tweeted about Brackenfell

On Monday evening, Julius Malema took to his Twitter account. After sharing several videos which showed the brutality of the physical confrontations, he made a very short – and very sharp – statement to his 3.3 million followers online:

“Wait until we respond, all fools will have an opinion.”

The EFF has already threatened to ‘completely shutdown’ Brackenfell in response to this latest controversy, and they have also vowed to recreate the scenes which recently took place in Senekal.

The Free State town became a hot-bed of racial tensions, after a group of locals tried to attack two suspects accused of orchestrating a farm murder. The EFF then launched a counter-protest, as thousands squared-off on the streets. The political party – and Julius Malema himself – are now asking South Africans to ‘watch this space’…

Wait until we respond, all fools will have an opinion.