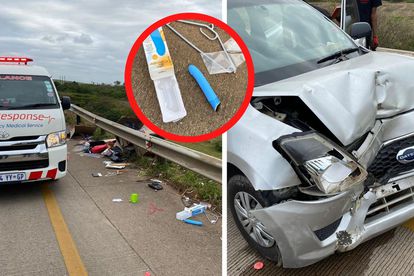 Box of sex toys causes an accident on the N2 in KZN Photos: MediResponse

Box of sex toys causes an accident on the N2 in KZN Photos: MediResponse

A box of sex toys caused an accident on the N2 on Saturday. It allegedly flew from a trailer on the vehicle in front of the car that crashed. Vibrators and other toys were left scattered on the N2.

THE BOX OF SEX TOYS CAME FLYING FROM A TRAILER

According to Medi Response spokesperson Paul Herbst, the accident happened on Saturday afternoon.

“Medi Response paramedics responded to reports of an accident on the N2 near Ballito, KZN.

“Reports from the scene indicate that a vehicle was traveling behind an LDV towing a trailer when a box of sex toys allegedly flew off of the trailer, hitting the car behind. The vehicle that was struck lost control and crashed.”

VIBRATORS AND OTHER TOYS WERE LEFT SCATTERED ON THE N2

He said no serious injuries were reported.

Meanwhile, a biker was seriously injured in an unrelated accident in Gauteng on Saturday afternoon.

According to Emer-G-Med spokesperson Kyle van Reenen, the accident happened just before 17:00.

“Just before 17h00 on Saturday evening, Emer-G-Med paramedics responded to the scene of a serious motorcycle accident on President Fouche Road in the Randburg area.

“On arrival on the scene, a male motorcyclist was found to have been ejected over the handlebars of his superbike, landing approximately thirty metres away.”

He said the biker was found to have sustained critical injuries.

“Several advanced life support intervention methods were needed to stabilize him before he was placed onto a mechanical ventilator to assist him in breathing and transported rapidly by ambulance to a specialist facility for the definitive care that he required.”