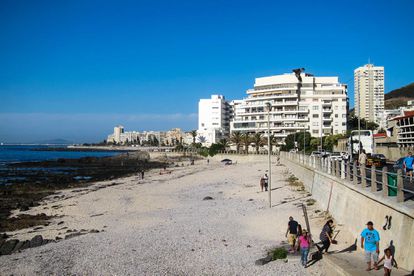 Police have asked for assistance from the public on Monday, following the discovery of a dead body near Sea Point Beach. The unidentified female was found in the surfline near the public swimming pools – but the circumstances surrounding this incident remain a total mystery.

Body found at Sea Point Beach – what we know so far

We have, however, been able to establish some key facts, which shed a little more light on this baffling case:

NSRI recover an unknown woman from the sea

The National Sea Rescue Institute were the first responders on the scene. They confirmed that two crews were involved in the recovery of the deceased, which also involved a team of divers. According to a statement issued by the NSRI, the body has now been sent to the pathologist for further investigations.

“At 10:53, Sunday, 10 January, NSRI Table Bay duty crew, NSRI Bakoven duty crew, and NSRI EOC (Emergency Operations Centre) were alerted to reports of a body in the surfline in front of Sea Point Swimming Pool. NSRI duty crews were placed on alert and the NSRI Bakoven sea rescue craft, in the area at the time, diverted to investigate.”

City lifeguards discovered the body of an unidentified female floating offshore outside the boundaries of Sea Point Swimming Pool this morning.

They were on patrol in the area at the time, and summoned emergency services who are currently on scene.#CTNews pic.twitter.com/8YBh0usOaR