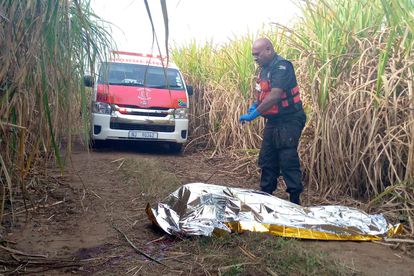 A RUS member pictured next to the body. Image: RUSA.

A RUS member pictured next to the body. Image: RUSA.

The body of an unidentified man was discovered with gunshot wounds to his head in a sugar cane plantation next to the M27 in Inanda, KwaZulu-Natal (KZN) on Thursday morning.

According to private security, Reaction Unit South Africa (RUSA), the man’s body was discovered by farm labourers at approximately 07:44.

Spokesperson Prem Balram said RUSA members were then dispatched to the scene after being notified of the discovery.

“On arrival, RUSA Members were led down an unpaved road to the location of the deceased. The man had sustained gunshot wounds to his head.

“Three spent 9mm cartridges and a Hollow Point bullet were recovered in the vicinity of his body. The motive for the murder was not established.”

Recently, the body of an unidentified man who was bludgeoned and stabbed at least forty times was discovered by a passerby in overgrown vegetation on an unpaved road next to a river in Oakford also in KZN.

Both these incidents follow a similar one where a body of an unidentified man with a gunshot wound to his head was discovered in a cane field in Inanda also in KZN.

A farmer reportedly made the gruesome discovery. “On arrival, RUSA Medics examined the deceased who was lying in a prone position on an unpaved road. He sustained a gunshot wound to his head and right arm. The motive for the murder was not established,” RUSA said.