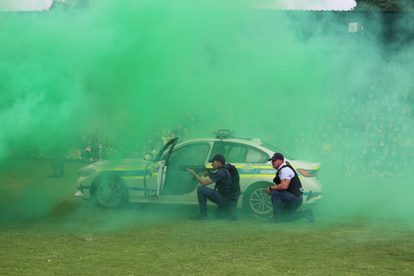 Bloemfontein police have clamped down on illegal firearm possession in the region. Image: SAPS/ Supplied

Bloemfontein police have clamped down on illegal firearm possession in the region. Image: SAPS/ Supplied

Lieutenant Colonel Thabo Covane has confirmed that Bloemfontein police officials have clamped down on illegal firearm possession in the region.

Vendor among those arrested during police operation

In a statement issued by the SAPS on Monday it was confirmed that three suspects had been arrested during an operation over the weekend.

“The team conducted a random stop and search in Heidedal Police Station precinct and arrived at a hawker stall. They asked permission to search from the African male selling fruits and vegetables and he agreed. A 7.65 mm Calibre pistol black was found hidden underneath the stall table with a magazine loaded with four live rounds.”

During the incident, it emerged that one of the suspects present were illegally in South Africa which resulted in additional charges.

“There were two African males sitting at the stall and the police asked for the firearm licence from both of them. The 38 year old owner of the stock on the stall and his 43 year old friend did not have any form of identification documents with them. They then informed the police that they are from the neighbouring country and had no proper documents allowing them to be in the Republic of South Africa. The owner of stock was arrested for possession of unlicensed firearm and being in the Republic of South unlawfully. The 43 year old friend was also arrested as an illegal immigrant.”

Incidents on the rise with another arrest confirmed

Furthermore, Covane confirmed that a separate incident saw a 24-year-old suspect being taken into custody for possession of unlicensed firearm and ammunition.

Will President Cyril Ramaphosa resign TODAY? He is expected to address the nation soon