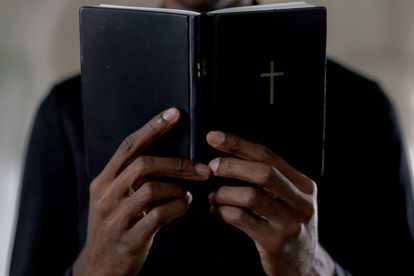 A Bloemfontein pastor was arrested on Sunday by the Hawks for rape and human trafficking.

THE 54-YEAR-OLD MAN WAS ARRESTED IN HIS HOME

“It is alleged that on Friday, a woman was offered domestic work and to also look after a child at the house of the suspect, who is known to be a pastor.”

Singo said the woman was reportedly informed by the pastor that he will be attending a church service in Thaba Nchu during the night and that she must look after his son.

“However, the suspect allegedly remained in the house that night and forced himself on the victim repeatedly raping her throughout Friday and Saturday nights respectively.”

Singo added that the pleas of the woman to be released were refused.

“The victim managed to get hold of the suspect’s cell phone on Sunday and immediately called the South African Police Service (SAPS) toll free 10111, seeking assistance. She later escaped with the cellphone and the son of the suspect.”

Meanwhile, the Hawks team was contacted to assist the woman.

Singo said the pastor was arrested at his residence in Lakeview Bloemfontein.

“The police recovered a vehicle that was reported stolen in the Park Road Police station in Bloemfontein during the arrest of the suspect.”

The pastor is expected to appear in the Bloemfontein Magistrate Court on Wednesday. He faces charges of rape, human trafficking, and possession of a stolen motor vehicle.

This after a 21-year-old woman opened a case of sexual assault against Bishop Makamu, just a week prior.

It is believed the alleged assault took place at Makamu’s church office in Alrode.

Makamu appeared in the Palm Ridge Magistrates Court, where he was released on R2 000 bail.